Baseball (softball) is one of my favorite sports to recommend to those wanting to learn sports photography. Not because it is an easy sport to photograph, but simply for the fact that it allows photographers time to think about what may happen next. It is less chaotic than other sports. For sports such as soccer, lacrosse or basketball, the action is chaotic and can change direction at any time. A player can pass left, right, go backwards and take a shot from anywhere on the field plus the defense can take the ball away and start moving the opposite direction at any time - kind of like photographing a bunch of cats at a catnip factory.

Baseball on the other hand has a strict set of rules that allow the photographer to make an educated guess as to what may happen next. You know the batter is going to step into a designated box to start the play. You know the pitcher will wind up and throw in one direction. You know the batter will run to first base, then second, third and home. You can guess that if it is a right-handed batter, the ball is more likely to go to the left side of the infield. On a ground ball, the infielder is most likely throwing to 1st,etc... All of these moments allow time for the photographers to reposition themselves to capture the moment. Now there are plenty of non-predictable moments in baseball, but a majority of the action can be anticipated, thus more easily captured. Again, photographing baseball / softball is not easy, just more predictable.

So let's get into the dynamics of capturing the action by first discussing the best positions to shoot from. One of my favorite positions is just beyond first base looking back towards home plate. On most fields, you are free of shooting through the fence from this angle. You can capture the batter swinging, running down the first base line and you get a head on view of the left side of the infield including the pitcher. You are also in a good position to capture a play at second. This is where you get all those awesome double play acrobatics by the infielders to avoid a sliding runner. For plays at the plate, you get a wide-open view of both the runner and the catcher.

This same position over on the third base side can offer some nice options as well. You can get the batter swinging, the first baseman stretching out for the ball, the pitcher and right side of the infield plus a wide open view of any plays at second or a runner sliding into third. For plays at the plate, you get a perfect view of the catcher laying down a tag. 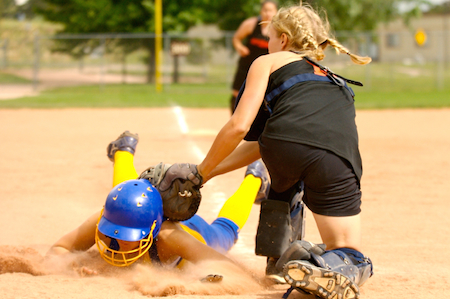 In order to get a dynamic shot of the pitcher, try moving behind the backstop directly behind the catcher. Now you are getting shots of the pitcher throwing right straight towards you. A couple of things to keep in mind from this position! Keep your movements slow and subtle because you can be very distracting for the pitcher as you are right in their line of vision, Also, you will need to get your lens up close to the chain link fence in order to make the fence blur out and disappear. However, be very, very careful. If there is a wild pitch or a foul tip straight back, you can end up with a shattered lens when the ball hits the fence and smashes it. Get your photo of the pitcher winding up and releasing the ball, and then ease your lens back away from the backstop by 3-4 inches by the time the ball reaches the catcher. 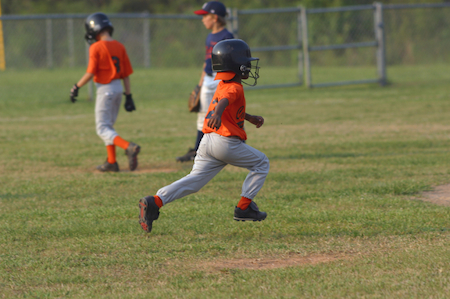 Lets run through a sample series of plays and talk about how you might anticipate the action. It is the bottom of the 9th inning and there is one out and no runners on base. The team is down by one run. The batter comes to the plate. I might move over to the right side, behind the low fence and get photos of the batter taking swings from just beyond 1st base. The batter hits the ball and I get photos of them running down the line to first base and the runner is safe. The next target is second base. I know the defense would love to turn a double play. Second base is going to be a popular place. Now I might hustle over to the other side of the infield behind 3rd base. I get some shots of the pitcher, the batter and when the ball is hit on the ground to the shortstop, I have a clear shot of second base as they attempt to turn a double play. Great shots and you were in the right place at the right time. So they got the player out at second but not the runner at first. Two outs and the offense is getting nervous. I stay where I am at third because I know they will probably have that runner steal. Sure enough, on the first pitch, the runner goes and there is a throw to second. Snap, snap, snap…more great photos. Runner is safe! Now if any ball goes through the infield that runner on second is going to try to make it home and there will be a play at the plate. Now, if I stay on the third base side and there is a play at the plate, I will only see the runners back and the catcher however, if I hustle back to the 1st base side, I would have a perfect side view of both the runner sliding and the catcher laying down the tag. Sure enough it happens just like that and there you are capturing the slide and the celebration as the team mobs the runner.

Now of course, we are not always so lucky, but you get my point. Baseball / softball, is a game of anticipation. Use that to your advantage and you will increase your odds of capturing some amazing photos.

Have a blast! And if you're looking for a baseball team management app for your upcoming season, try TeamSnap!