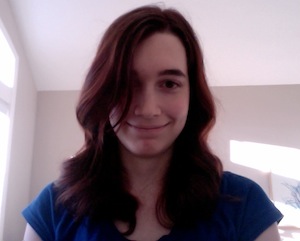 TeamSnap is excited to welcome Emily Dobervich to our development team!

Her parents bought a computer when she was two years old. She sat on a chair nearby while her brother got to use it and whined, “I wanna play ‘puter too.” Since then she has played lots of computer. At ten years old her dad brought home a copy of VB6, and she decided she was going to make games. She still programs games, though not in VB6. Discussions about pixel shaders or content-generation techniques excite her to no end.

Emily is a musician. She primarily plays jazz piano. She also can play, though not necessarily very well: saxophones (bari, tenor, alto), bassoon, clarinet, flutes, french horn and vibes. She also knows how to play the triangle much better than she wishes she did. It is actually a very complicated instrument.

Emily doesn’t play any sports, but she does enjoy watching basketball when she actually has a TV. It apparently has never occurred to her to go see a game in person. She does however bike a lot, and until recently biking was her primary transportation around her home of Portland, Oregon. Her bike has been stuck in first gear for almost a year — she likes to think that when she finally gets it fixed that biking will become incredibly easy for her.