For ringette players, communication is key. Similar to hockey, ten skaters (five per team) rush back and forth across an ice-covered rink, working together to shoot a ring past the other team’s goalie. Players must pass the ring constantly to advance forward, so one player taking over the game isn’t really an option.

The Beaumont Benders, a Canadian youth ringette team and TeamSnap customer, exemplify the teamwork and spirit of the sport. In the age of the highlight, when individual performance can sometimes take precedent over teamwork, it’s refreshing to see a team that really works together.

“[Ringette] is played with lots of passing, making it a great team sport,” says Landyn Carr, Benders assistant head coach and ringette veteran. “With all the passes being made to get up and down the ice and bodies not being held up because of hitting, ringette has been assigned the tag: ‘the fastest game on ice.’” 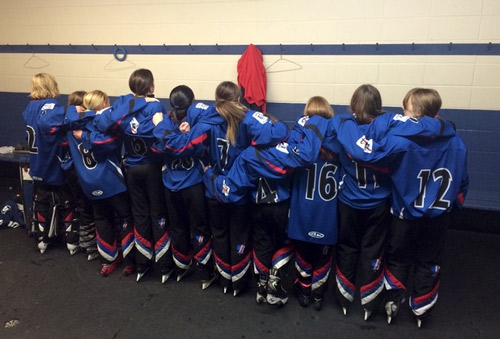 Any team playing at such high speeds requires discipline, and that usually doesn’t come without close relationships between teammates. The Benders are a tight-knit group of hard workers, and their numbers draw them together.

“We have a small team of only nine skaters and a goalie,” Landyn says, “so it is a must that we have all the girls at practices and games or else we wouldn’t be able to compete with such small numbers.”

Communication off the ice is just as important to the Benders as communication on it. That’s where TeamSnap comes in. If someone can’t make it, Landyn, the other coaches and the players need to know right away. After all, with just nine players, things can get a little dicey if only a few players miss a game.

“As a coach, I love that the girls and their parents can let us know who is going to be at practices, games or events ahead of time,” says Landyn. “I have TeamSnap on my phone, and I can easily see the numbers I’ll have when I’m making up practice plans. Or I can let the other coaches know that I will be absent or late, just by putting it on my phone.”

At only 19 years old, Landyn has done a lot in the sport already. This season is her fourth as a coach, her eighth as a referee and her twelfth playing. Despite her longevity in the sport, some players and parents are surprised by a young assistant coach––but that doesn’t outweigh the upside.

“I find I can get the players to listen to me or relate to me easier since I’m only about five to six years older than them, and I play the sport,” Landyn says.

For any coach out there, younger or older, helping young athletes achieve their potential is always rewarding. Coaches provide the dedication, leadership, and inspiration many teams need in order to succeed. For Landyn, coaching is all about helping her players improve.

“My favourite part of coaching is when I get to show the girls something that maybe they have never seen before or never thought about doing, and they they are able to use that skill or play correctly during games and practices,” she says. “Girls will come off the ice, look at me excitedly and yell, ‘Did you see that?!’ It’s so much fun to see them improve on a skill like that.”

And what’s the one word Landyn uses to describe her team? Well, that’s easy.

“Ambitious,” she says. “The players, coaches, and parents have been hardworking and dedicated all season.”

When you play the fastest sport on ice, it’s not always easy to keep in touch––but the Benders continue to do it every season, on and off the ice.

Kyle Massa is a Marketing Intern at TeamSnap who specializes in all things social media. Outside of work, Kyle enjoys writing, running, reading, rock music and alliteration.