While some kids are playing video games or watching TV this summer, a group of soon-to-be 9th graders in Lakeville, MN, will be designing, building and testing robots in a basement they call The Vortex.

The Polar Vortex Robotics Club, a team of seven girls and two boys, just finished their rookie season and placed seventh out of 108 teams in the Minnesota FTC Stratasys State Championship judged awards. We’re proud to call them a TeamSnap customer.

When Darren and Nichole Hester’s oldest daughter was unable to play softball anymore, they searched for a non-athletic group she could join to stick to their family rule of “everyone must be on a team.” She joined the local Fish in the Boat Robotics Team and loved it. 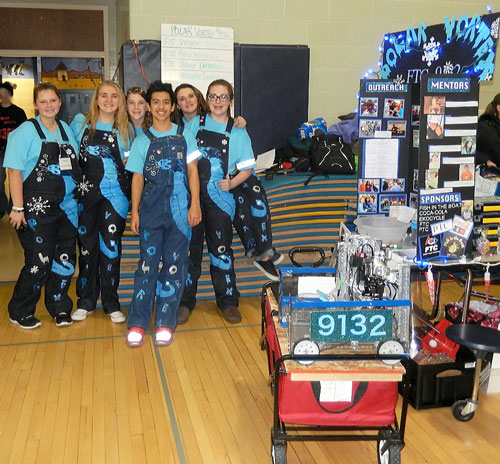 “It’s a great confidence booster and great for resumes and trying to get into college,” Darren said. “She joined that team and as a result, her confidence shot through the roof, and she is now studying physics in college and wants to go into nuclear medicine.”

Darren and Nichole formed the Polar Vortex Robotics Club after searching for a team for their younger daughter to join as well and finding that many of them were full. Robotics clubs often form in the early middle school years and stick together through high school, making it difficult to get a spot for those joining later. Stepping up to the challenge, they formed their own team as part of FIRST Tech Challenge, recruited a mentor from Fish in the Boat and started meeting in their home basement, now christened The Vortex.

FIRST Tech Challenge (FTC) is a robotics program designed to expose teenagers to Science, Technology, Engineering and Mathematics (STEM) through challenging robotic games that require them to design, prototype, build, test, and program autonomous and driver-operated robots to perform a series of tasks. The program promotes teamwork, creativity, hard work and “gracious-professionalism.”

“You say ‘robotics,’ and everyone automatically assumes you’re super smart or super academically endowed, and that doesn’t have to be the case,” Darren said. “None of our team members have crazy computer skills or building skills, they’re just a bunch of kids we’re trying to teach critical problem solving skills that hopefully translate into school work and the rest of their lives.”

Four months after forming in September 2014, the team built a competition robot, created a team name and logo and started their engineering notebook to document their development journey. Because they’re not affiliated with any one school, Polar Vortex is completely self funded and “works with sponsors who provide tools, resources or financial opportunities to help offset the costs of the managing/organization, robot parts, tacos, traveling, tournament registration, uniforms, pizza, pit set-up and spaghetti,” Darren said. 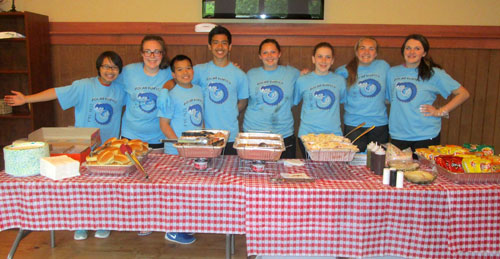 The coaches and mentors for the team look for a variety of learning opportunities  including: explanation design, development, prototyping, re-design, failure analysis, business planning, promotion, fundraising and many others.

That’s where TeamSnap comes in. One of the group’s mentors lives five hours away in Wisconsin, and with TeamSnap’s Schedule feature, she can see when events are planned and mark her availability to say which ones she can attend by video conference. Darren said TeamSnap also helps him keep the team members and parents on the same page and keeps him from having to send multiple planning and follow-up emails.

“There are a lot of balls in the air with robotics,” he said. “I thought coaching softball was difficult, but it’s not nearly as time consuming as robotics because everything has to be planned. I can’t just say, ‘Practice is Tuesdays and Thursdays,’ and then show up and hit grounders to the team. When the kids get to the basement, we need a plan on who’s doing programming, who’s doing building, where we are in the build process.”

In addition to regular meetings, which go throughout the year, the team also holds fundraisers and STEM learning sessions. In July, they’ll conduct a camp at a local community college to teach underprivileged children about robotics. Having all of these events organized in an app everyone can use “will help me organize my thoughts so I can organize the team better,” Darren said.

As the team heads into their second season, spirits are high, and rightfully so. Polar Vortex made huge strides for a new team after just their first competition. Their first robot iteration, Darren said, was “below average, but they saw what other teams were doing and integrated some of those designs and made the robot so much better with just a few simple fixes.” With a whole year under their belts, the sky’s the limit for this robotics team.

For more information on the Polar Vortex Robotics Club and a chance to help them reach their fundraising goal for the coming school year, visit their GoFundMe page.

Stephanie Myers is the Content Manager for TeamSnap, managing such content as this blog, the TeamSnap newsletter and much more. When she’s not being the boss of content, you can find Stephanie playing lawn games or working on her 95-year-old craftsman home in Memphis, Tenn.