What Message is Jurgen Klinsmann Sending to Our Youth?

As many Americans who love soccer did on Thursday, I eagerly awaited the announcement of this year’s 23-player roster for this summer’s World Cup. And, along with so many others, I was surprised that arguably one of the most brilliant players the U.S. has ever produced, Landon Donovan, was left off the roster by Jurgen Klinsmann. 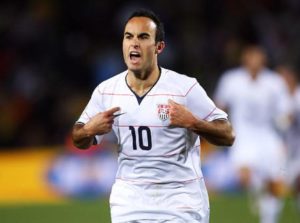 Unfortunately, the message that Klinsmann is sending to our youth athletes – from the eager five-year-old just putting on his first pair of cleats to the college player who has been playing since she was five years old – is that you can never rest, you can never take a break, you can never put your family first, or you risk losing your spot on the team.

Even if you feel mentally exhausted, physically run-down, or maybe you want to go to your grandmother’s 90th birthday party instead of playing in a game, you’d better not do it, or you’ll get left off the roster. Left behind. Thrown out with the trash.

Seriously, if Landon Donovan – who has been playing soccer since the age of six, which puts his total years played at 26 as of today – cannot take a sabbatical or a break from the game without losing his spot on the team, well, then, clearly no one can.

And this is a dangerous message to be sending to our youth, especially with the growing number of experts warning against year-round play and single-sport specialization at earlier and earlier ages, which has led us to an overuse injury epidemic: ACL injuries in soccer and basketball, Tommy John surgery in baseball, serious head injuries in soccer and football, and blown-out shoulders in volleyball. Many of these injuries are occurring because kids are not taking a break — ever.

Listening to your body – and your mind – as Donovan did, should be commended, not punished. He felt emotionally worn out and physically exhausted after 26 years of playing. Wouldn’t you?!

I am extremely concerned, however, that with Donovan’s personal decision to take time off and Klinsmann’s clear disapproval of this decision, the efforts of so many youth sports experts and sports medicine professionals will also take a HUGE step backward. More youth athletes will push themselves to the brink of exhaustion, ignore their bodies’ signs of overuse, and put inconsequential games ahead of irreplaceable family lifecycle events because they are fearful of losing their starting position or their roster spot. And more hyper-competitive parents will say, “You don’t want to be like Landon, right?”

So, Donovan’s snub on the World Cup roster is not just a loss for the U.S. Men’s National Team, a team that could surely use an experienced playmaker like Donovan as it heads into a wickedly tough World Cup draw, it also sends the wrong message to our youth athletes.

For more on the subject of World Cup and overuse injuries, be sure to check out TeamSnap’s Youth Sports Podcast episode, “World Cup Injuries and the Soccer Concussion Debate.”

Emily Cohen is the host of the TeamSnap Youth Sports Podcast, which can be found at www.teamsnap.com/podcast. An avid tennis player, Emily has a son who plays varsity high school baseball and a daughter who plays high school soccer and tennis. She has been a team manager for a number of her children’s sports teams. You can follow Emily on Twitter at @emilygcohen or email her at emily.cohen@teamsnap.com