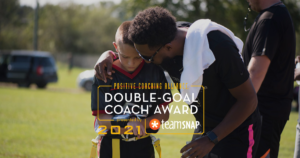 TeamSnap and the Positive Coaching Alliance partnered up to give out the Double-Goal Coach® Award, which celebrates the coaches, administrators, and team parents that have contributed to the success of athletes and teams across the country.

The Double-Goal Coach Award, now in its 20th year, is one of the highest honors a U.S. youth sports coach can receive. Positive Coaching Alliance (PCA), a national non-profit developing “Better Athletes, Better People,” works to provide all youth and high school athletes a positive, character-building sports experience. The Double-Goal Coach® Award recognizes coaches who go above and beyond, pursuing not just wins, but the more important goal of teaching life lessons through sports.

The PCA received more than 600 nominations and over 3,000 letters of references for the nominated coaches. Of the +600 nominations, 100 coaches were selected as regional winners!

The 100 coaches, listed alphabetically below, were selected out of 600+ nominations that received over 3,000 letters of reference. (1 additional coach will be added pending the background check). View the full list of Regional Double-goal Coach® Award Winners here.

During the month of March, the PCA’s selection committee will choose 25 National Winners, all of whom will receive $500, a certificate from PCA, and recognition on PCA’s website, newsletters and media campaigns. In April, one coach will be selected as the recipient of the Taube Family Prize in Recognition of Excellence in Coaching and will be named PCA’s Coach of the Year.