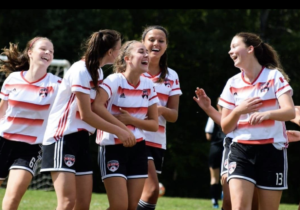 Remember when wrestling and football were only for boys? Not anymore! Girls are competing more and more in sports that did not welcome them before. The result is that there are more young female athletes than ever.

ESPN reports that, “According to the National Federation of State High School Associations, girls’ high school participation reached an all-time high in 2017-18 for the 29th consecutive year with 3,415,306 opportunities for girls to compete.”

These trends indicate increasing opportunities for female athletes. Of course, it’s up to parents and coaches to empower female athletes to become the leaders they can be in their sports and in life.

If you are a coach or parent, here are ways you can empower the young women you influence.

Teach young women to speak up.

Arm young athletes with the tools and skills they’ll need to verbally defend themselves and/or express their needs. For example, it’s okay for a child to say, “Stop, I don’t like that,” to a peer or coach who is doing something demeaning, or to report an adult who is speaking to them in a derogatory or inappropriate way. Make sure athletes know you are a trusted adult, and that they can come to you for help.

Show them how to be leaders.

Moms and female coaches have great influence in this area of leadership. Girls need to see that leadership is not just for men. Whether you are a male or female coach or leader, show set an example through your own behavior, whether it’s your attitude toward winning, how you handle team issues, or even how you set up practice.

Let girls fight their own battles.

I saw the importance of this with my own two daughters who’ve played sports from a young age through college. As they learned to fight their own battles in sports, their confidence and resilience grew. This translated into other areas of life, too—including at their jobs and in relationships. My husband and I breathed a bit easier knowing our daughters would not be walked on by others, or pushed into doing something they didn’t really want to do.

Consistently express your belief in your young athletes, and back it up with your support and positive encouragement. It will strengthen their confidence and diminish risk-taking fears, and your girls can grow stronger because of it.

Young women should not feel, in any way, that their looks or talents determine their value, whether in life or as part of a team. While it might seem harmless to constantly comment on how cute or pretty or skilled they are, it can cause girls to develop a sense of self-worth that depends on appearance or performance. Let your kids know that beauty starts from within, and encourage traits such as determination, creativity, bravery and compassion.

Encourage dads to be involved.

Australian psychologist Steve Biddulph, author of Raising Girls and 10 Things Girls Need Most, stresses the importance of a father’s role in raising confident girls. He explains that a father is “the blueprint for what she can expect from boys and men.”

While many dads are wonderfully supportive of their daughter athletes, others are unknowingly squashing confidence by what they are NOT doing. When my daughter played middle school basketball, one of her teammates had two older brothers who were very talented football players. Her friend’s dad never missed one of his son’s games, but was a rare sight at his daughter’s basketball games. I couldn’t help but wonder, how did that make her feel? I can’t help but think it hurt her feelings of value in his eyes.

While it seems that male sports dominate media reports, women’s sports are there if you look for them. Watch Serena Williams fight hard at the French Open, or Danica Patrick race at the Grand Prix. The summer Olympics this year will provide many opportunities to watch outstanding female athletes.

Discussing young female empowerment is unfortunately still necessary in today’s sports world. It’s up to us as parents and coaches to encourage their dreams, support their goals and give them the tools they’ll need on the field and out in the world.