How the Sanger Warriors Softball Girls Raise Each Other Up

DQ® has a long-standing history of supporting youth sports and people who give back to their communities. This year, DQ® chose to celebrate outstanding athletic teams by highlighting their commitment to community growth and well-being. Coach Torres’ 12U Sanger Warriors are one of the DQ® Beyond the Game Contest winners recognized for displaying excellence in community service and sport.

A path with heart is one that leads to success—and this is how the Sanger Warriors Fastpitch Softball organization in Fresno County, CA came to be. A group of parents, coaches and players formed their own organization with the goal of creating a fun environment for girls that could also teach them life-long skills that would serve on and off the playing fields. 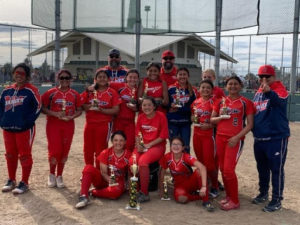 Hard work led to a 1st place win in the gold bracket for the Sanger Warriors!

Now a nonprofit organization, the Sanger Warriors continue to play from the heart—and give to  others in the process. The individual teams conduct service projects each season, and for coach Rafael Torres’ 12U athletes, that means mentoring younger players who are just starting out.

“They tutor the younger girls in how to field the ball, run bases, and to have proper form for swinging the bat,” explains Carillo. “They’ll even grab hands and run with the little girls and cheer them on. They really share their love for the game, so the younger athletes can grow up with the same passion.”

“The sport itself teaches responsibility, not only to themselves but to others,” says ‘Team Mom’ Misty Carillo, a parent and one of the volunteer managers for the Torres 12U team. “And the mentorship program helps the girls learn this even more.” 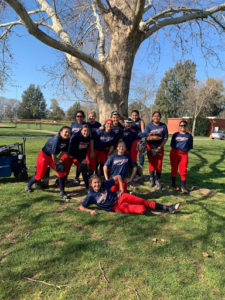 The very first tournament of the season for the Sanger Warriors! A 4 hour drive from their hometown and the girls really started to bond between games, the first steps to gaining each other’s trust on and off the  softball field!

Most of the girls on the Torres team are just 12 years old, and they’re already learning how to be excellent coaches and citizens. They typically swap one practice session each week to teach four- and five-year-old girls in the recreational T-Ball program over the six-week season.

In addition to becoming all star mentors, the Sanger Warriors 12U team also gives time to the larger community, whether it’s helping to stock the local food pantry or serving food to the homeless during holidays. “This teaches them that they have a greater purpose in life than just their focus on softball,” Carillo says. “They learn that it’s rewarding to give back to others who are less fortunate, and to appreciate and be grateful for what they have.” 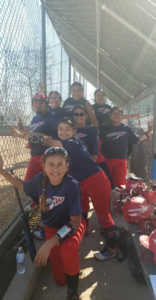 The girls gather in the dugout for a quick photo op.

Carillo notes that the girls were thrilled to learn of their own reward, as one of the selected winners of DQ®’s Beyond the Game contest. “They were so excited,” Carillo says. “They’re looking forward to enjoying Blizzard® Treats.”

Prior to social distancing, the team would stop at DQ®  to share a meal after games. “The athletes would sit at one table, and the parents at another,” Carillo says. “It helped everyone get to know each other on a different level, outside of softball.”

Now the team is practicing again, and Carillo says the girls are enjoying their time together back on the field. “It’s like a sisterhood more than anything else,” Carillo explains, noting that the mentorship program is also currently on hold, but the girls are looking forward to being ‘older sisters’ again when they can. “Watching them with the younger athletes was always heartwarming to see,” Carillo says.

Click here to read other DQ® Beyond The Game team stories.