I thought I knew everything there was to know about baseball practice. Then I got to college.

What would take a full two-and-a-half hour practice in high school would be accomplished in an hour, maybe a touch longer. There was no dead time, no standing around and every drill was designed to get as many involved as possible. It was a thing of beauty.

Practices for little ballplayers should be no different. It is critical to keep their attention and make it fun while making sure they’re getting instruction on individual needs as well as the team aspects of baseball. That puts a lot of pressure on the coach to be efficient.

I find running practices the way they were run when I was in college, using some of the same drills, is a great way to keep the kids engaged and leave time to throw in some fun at the end without compromising the learning. 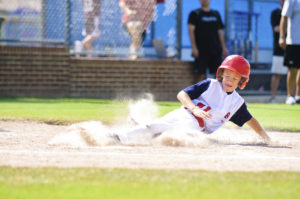 Except for the five to 10 minutes I was at the plate, every BP session I ever had growing up was an excruciating exercise of standing around waiting for the occasional ball hit to me. In college, we had a couple of different approaches to getting our hitting work in.

One of my favorites was a drill called One-Pitch. Split your kids into three groups. One group hits while the other two are in the field. With a coach pitching, each group bats for one-third of the time allotted. Just like the name suggests, the batters only get one pitch. A fair ball is in play; foul balls and strikes (swinging or looking) are outs. I also split my catchers between the groups and have one of them behind the plate during each rotation so they can work on receiving.

One-Pitch has a dual benefit. The fielders are put into a lot of different defensive situations in quick order and it reminds the hitters to be aggressive at the plate. Plus, each kid is gets a lot of swings.

Another option is to run a more traditional session, again breaking them up into three groups and letting each kid have five to 10 swings per at-bat with each group going through two or three rotations. I have the coaches hitting fungoes to the infielders and outfielders between each pitch. Same as with One-Pitch, a coach pitches and I have one of my catchers behind the plate.

Again, there is a dual benefit.  First, no one is standing around waiting all day for a ball to be hit to them in the field. Second, and more importantly, it’s efficient because I’m taking care of hitting and routine fielding at the same time which leaves me an option of running specific fielding drills or working on specific defensive situations later in the session and not while also trying to get fielding work done.

We always had different stations set up in college, and with the kids, I’m a big fan of having simultaneous stations whenever and wherever possible. It’s a great way for each kid to get some focused work in a particular area with a coach who can give also give individualized instruction.

For example, if I want to get the catchers some work on moving from receiving to throwing, I’ll set up three stations. One for the catchers, a hitting station and a fielding station. As my summer league only allows stealing of third base, a typical catcher’s drill is to have one at third, one behind the plate and the other(s) five to seven feet in front of the plate. The ball starts with one of the catchers in front of the plate tossing a “pitch” to the catcher behind the plate to receive and throw to third base. A couple of throws and rotate, repeat.

I like to rotate all the kids through all the stations. Even the non-catchers try the catching drill, because it’s good throwing work either way and you never know when we’ll be forced to use an “emergency” catcher.

For fielding, as I won’t have the entire field to work with, I might choose to work on covering first on grounders to the first baseman or turning a double play (which at this age really means get the force play at second). Or maybe we’ll work on fly balls in the outfield. The kids who are not working on fielding are hitting off a tee into the net or doing soft toss. Again, everyone is doing something and I’m more efficient because I’m covering two or three aspects of the game at the same time.

This is the one area I deviate from college, partially because I wasn’t a pitcher so I’m not really sure what they did (does anyone really know what they do?) Furthermore, the kids do not have designated positions at this age, i.e., no one made my team as a “pitcher.” I have them split into two or three groups of even numbers so that each kid has a partner. Then I split the partners into groups so I have a coach watching each group. When I want to get kids to work off the mound (we only have one per field), then stations come back into play.

While the pitcher is doing his bullpen, ideally to a catcher, I might have some tee work going on and have another group working on fly balls in the outfield or some other defensive drill. Or maybe I’ll have an infield station and outfield station.

I like to start every practice with a hitting circle in which the kids hit whiffle balls. It’s important that all the kids warm up and loosen up as a team, both because it helps them come together as a team (I usually let a different kid be captain and lead the team through the warm ups) and because nothing disrupts practice more than stragglers coming in late.

When it comes to baseball practice, there are hundreds of drills and variations you can choose from.  The key is to keep practice moving, keep everyone involved and never stay on one drill for too long.  Kids have such short attention spans, it doesn’t take long before they become bored.

For me, the best way to keep them engaged is to take a few pages out of the college playbook. We tend to “dumb down” practice, but I’ve found the more your treat your kids like young adults, the better they respond. Because when it comes to how you practice, efficiency rules the day.