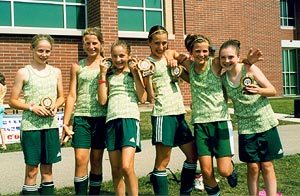 You can’t let praise or criticism get to you.  It’s a weakness to get caught up in either one.  – John Wooden

There are many traits that distinguish elite athletes from the rest of us. The one that impresses me the most – seen especially in the very best – is the ability to simply move on, win or lose. Pro athletes enjoy plenty of success but they are also expert losers. Sure, they play sports for a living and have therefore developed a long-term emotional coping mechanism to deal with failure, but they can be role model losers for our young athletes nonetheless. They’ll all agree it’s more fun to win, but that’s only because of the very real possibility of losing.

How can youth coaches help kids learn to win through losing?  Here are four ideas:

When a young player drops an ordinary fly ball, my non-verbal reaction is, “No big deal, get the next one”. My co-coach reacts by demonstrably wiping his brow at the player as if to say, “No sweat”. And when that player does get the next one, my next non-verbal response is a similarly stoic shoulder shrug: “See, it’s simple, again, no big deal. Now move on to the next play; get back to work.”

Admittedly, that emotional control has required practice; it’s not easy.

By the time our team was 0-6 in the league standings, my players had experienced hundreds of other smaller and more frequent wins and losses that my coaches and I featured prominently. So the six actual losses didn’t stand out as much to us or inflict as much emotional damage as some might suspect.

Ours was a culture of competition, of grinding, of enduring, of hard work, and correctness. My players were encouraged to strive to outdo, to push, to improve. Our team culture was sort of recession-proof; it carried on irrespective of game outcomes. Ours was never a culture of absolute winners and losers. Rather on our team, there are lots of small relative wins and losses. We win or lose every at-bat, we win or lose every pitch, every play, every inning, and we win or lose the countless contests we hold at practices. We don’t let any single win elevate us to the heavens or any single loss mark the end of the world. We just try to move on, win or lose. We serve our players a healthy and balanced diet of wins and losses in various forms and abundant quantity as a way of keeping the game outcomes in perspective. Games are meaningful, but they aren’t our singular, defining measure.

Let players solve their own problems:

Lori Gottleib’s recent article on parental obsession with children’s happiness resonated with me as a youth coach. She remarks that while it’s always been natural for parents to want their children to be happy, we’ve seen a recent shift “from a quest for general contentment to the idea that you must be happy at all times and in every way.” On the ball field, this has troubling consequences. Sports just don’t work this way.

Applying Gottleib’s premise specifically to youth sports, it could be said that by protecting young players from disappointment intrinsic to sport we are depriving them of the joy of true accomplishment also intrinsic to athletics. If we want players to eventually experience the joys of athletics, they first must figure out how to play with sports-related disappointment and frustration. It’s tempting as a coach to try to fix everything, but there are some things young players need to fix themselves.

Showing a player that you trust him to battle through a jam will likely do more for his long term development than if you removed every hurdle at the first sign of distress. If we make the game too easy for him, we are inadvertently telling him that he’s not adept enough or emotionally resilient enough to play it the way it’s meant to be played. Rather than boosting his self-confidence through choreographed success, we risk diminishing his self-confidence by constantly coming to his rescue.

I actively look for adversity scenarios that I think my players can tolerate without my support, but I realize that those scenarios are not one-sized-fits all. I need to know my individuals and their respective limits. Age and experience of the player are important considerations, of course, but eventually hardship in some form will find them all.

The win-loss and success-failure continuums have wide spans and they cut both ways. A losing outcome doesn’t connote absolute failure, but a winning outcome doesn’t place you beyond reproach, either. Despite the sport of baseball coining the term, “Perfect Game”, no game will ever be played perfectly.

In our case, we probably could’ve ended up winning at least one of those first six games we lost, had a few breaks gone our way. And when we started actually winning games, we were the fortunate beneficiary of a few pivotal plays in at least a game or two. I was as quick to point those out when recapping a win as I was earlier in the season when I would contextualize a loss. My players learned to lose well, and eventually earned the chance to learn how to win well, too.

Coaches, share your ideas: How do you teach your players about winning and losing?