We were able to branch outside the landlocked state of Colorado to the Bay Area, where we caught up with Bruce Reed of the Twin Cities Little League. Bruce runs his league on TeamSnap, and says he wouldn’t have it any other way. Here’s why: 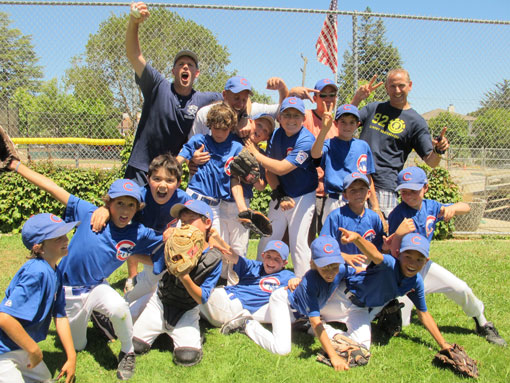 Bruce Reed (back row, second from the left) with the 2012 TCLL Minor Cubs

Efficient communication can be challenging when running a league, club, or circus. Do you have any tips for ensuring a clear pathway for relaying information between managers and players?

You said it. Communication is everything. We still have a ways to go but TeamSnap makes our work easier. On its surface, it’s a simple, intuitive tool for disseminating and organizing important information like scheduling updates via email and texts. But we are starting to see it as so much more: a teaching platform, a coach’s aide, a practice planner, a season’s journal, a resource library — even a link to the greater youth sports community. Any tool that makes it easy to create, manage, store, access, and disseminate important information quickly becomes a tool you never go back to not using.

If the Oracle were to pay you a visit before the league was formed, what treasures might she have shared with you about running it successfully?

Run your league on TeamSnap. I’m serious. Two seasons ago, I quietly piloted the program with just one team. It made me a better coach, which in turn increased my players’ and parents’ enjoyment levels. I can honestly say it won games for us by helping me create and maintain a team culture of organization and communication that carried over into our style of play and team morale/chemistry. I then proposed to my fellow board members that we adopt the system for the entire organization the next season. We now run everything on our little league website — registration, rosters, scheduling, everything.

Baseball is considered America’s pastime, or activity that someone would rather do besides work. How does your league sustain its fun-filled energy that keeps players coming back for more?

Our success is measured in the number of players who return the next season. We have nearly 600 players across 6 age divisions. We run a spring season from March – June and a Fall Ball Instructional League in Sep/Oct. In the younger divisions, we try to accommodate requests to play on teams with close friends. As players get older, we introduce a draft system to achieve competitive balance. All the way up, we focus on helping kids love baseball and being part of a team and a community. During the season, we mix-in formal and informal social activities to further develop the bonds that form on the field. An Opening Day Little League Parade through town, Post-game barbecues, a Mother-Son softball game, a Coach’s Game, and a league-wide field trip to a SF Giants game are a few examples of some of those activities.

Not unlike early batches of cat litter, baseball leagues are typically born from a whirlwind of sand, gravel, and pitching mounds. How did the Twin Cities Little League come to be?

Our name refers to the neighboring towns of Corte Madera and Larkspur — two Bay Area suburbs that share a strong community spirit and active lifestyle. TCLL has benefitted from this culture through a long history of volunteerism. The league was formed in the 1950s and has evolved over the years into one of the region’s most respected youth sports programs. We frequently host regional post-season games at our primary venue (Joe Wagner Field) — a Little League version of a “field of dreams” located in the center of town and built entirely by volunteers. In addition to the dozens of volunteer parents who serve as managers, coaches, team parents, and snack bar staff, TCLL has a number of community members who donate their time year after year to serve on the board, maintain the fields and equipment, and train our umpires.