I can remember every single hockey stick I’ve ever used. Honest. For most young players, the hockey stick is the final weapon in the arsenal, the component that gives the sport its true uniqueness.

Every child is thrilled when they open up a brand new hockey stick, and for good reason. Your stick says a lot about who you are as a player. Are you a shooter? A passer? A dangler? The length and flex of your stick will differ significantly depending on your approach to the game.

However, I’m here to tell you that when it comes to finding a hockey stick for young kids, you can worry about all of that later. For now, here’s what you really need to focus on:

Cost Shouldn’t Be Prohibitive (Yet)

The price tag on the last batch of sticks I purchased would probably peel the paint right off the hood of your car, so I’m not going to go there. The good news is you don’t have to worry about that yet. Finding the right hockey stick for your little guy or gal doesn’t have to be expensive.

They need something simple that allows them to learn how to stickhandle, pass and shoot. A hockey stick made from the same material as a space shuttle won’t fix your child’s slapshot. Sorry. Don’t worry, you’ll have plenty of time to spend a month’s paycheck when they start using senior sticks.

Look for a stick that’s lightweight and easy for your young athlete to flex. I don’t recommend flexing it yourself. Flexing a child’s hockey stick in the store to see what it’s made of will most likely result in a destructive public scene that’s hilarious to everyone but the person on the floor with the broken stick.

A lightweight stick makes it a lot easier to learn how to handle the puck. I’ve seen plenty of kids out on the ice with Dad’s old chopped down Sherwood 5030. These things weigh one metric ton and are not conducive to development. A child’s hockey stick should also have a good degree of flex so kids can get used to the mechanics of shooting.

Anyone who says there’s a hardline rule for the length of sticks is pulling your leg. The truth is that when it comes to sticks—and all hockey equipment, for that matter—personal preference will always rule the day. That doesn’t mean your child should pretend he or she’s the next coming of Zeno Chara and chop down a redwood to use in their next game, but it’s important to understand how length affects play. 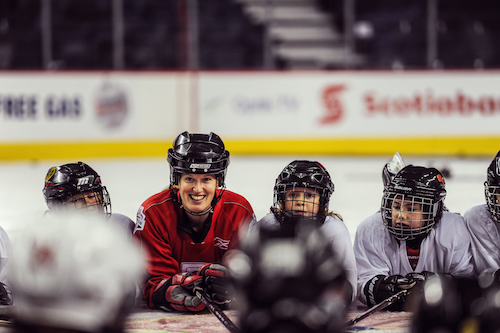 Remember, longer sticks provide more power on the shot, but are harder to stickhandle. Shorter sticks make it easier to handle the puck in tight, but offer less power behind the shot.

I tell kids and parents to find a sweet spot between the nose and the top of the chest while on skates, and that seems to work well. But there’s always that one kid who’s obsessed with a certain style of stick…wait, I think I was that kid.