Build Self-Trust and Bring Out a Better Athlete

Although lacrosse is the example used in this story, athletes of any sport can benefit from building self-trust.

Bill is a mid-fielder on his high school lacrosse team. Ever since he was introduced to it at the age of 10, he has been totally enthralled with mastering the sport.  He actually enjoys some of the drills and practices that his teammates find boring.  He loves working out and conditioning himself to improve his stamina, as he knows it makes him a better player. Bill’s coach taught him early that lacrosse players need to be constantly moving in order to be effective.

But most of all, he is fascinated with the strategies in lacrosse.  He reads books and soaks up his coaches’ advice like a sponge.  His dad played lacrosse in college and has also been a huge influence on his development. 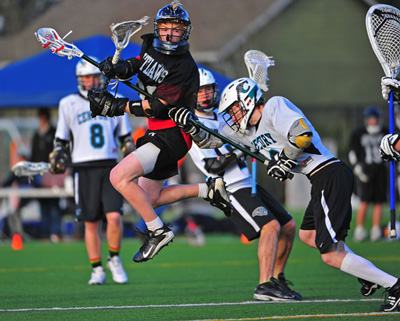 Unfortunately, there is a downside to all of this for Bill.  He tends to over think and under-react in games, which sometimes puts him a step behind his opponents. His dad and coach can see the hesitation, especially when he gets tied up with the ball. His dad says he gets that “deer in the headlights” look.

Lacrosse is a very fast-moving sport.  There is very little time to think. Everything that a player has learned in practices needs to come out naturally and automatically. Bill (and most athletes, for that matter) would improve their performance tremendously by learning and playing with:

Now, this word is thrown around the sports world everywhere, but what does it mean and how do you build it?

Trust is letting go of the mental need to control.  When you have trust in your body’s ability to perform the task in competition, it’s almost as if something else, not you, is directing your movements.

For athletes with a “need to control” issue, this is scary but it is essential to being able to play in the flow state where your full talent shows up.

To develop trust, the lacrosse player must first eliminate the main block to it:  FEAR.

How do you do that? I teach a process to all my athletes where the athlete embraces all emotions and understands that all of them are good and even necessary for our life.  When you truly welcome emotions, even difficult ones such as embarrassment and disappointment that come from failures, then you don’t FEAR them!

The short version to overcoming fear:

There are only two things to fear in this world:

1. Physical harm to the body, and

There‘s nothing else.  Let go of the fear of emotions, and you are basically fearless. Now, TRUST can emerge.

The quickest way to build self-trust is to recognize that you already do it in many areas of your life and you can practice transferring it over to the field.

Think about riding a bike, for instance. Do you get on the bike and start thinking about how to pump your legs and move your arms to steer?  No, of course not. You trust that once you get on the bike, your body will get you where you want to go.

Can you connect to that trusting feeling or idea right now?

How about the trust you have that the sun will come up tomorrow and create day?

Can you notice the difference in feeling now than before?  Can you bring that to the field?

Every time you make a successful move, pass, defense or even score, think about how trust was a big factor in that and know that you can grow it.  Being aware of it is a big first step.

I taught all of this to Bill, and he completely turned his game around.  His knowledge of the game then became an asset, and he used the TRUST he discovered to become the team’s most improved player.

Instead of thinking about it when a pass came to him, his body automatically moved toward it.  He started making better passing decisions.  Everything he trained and drilled so hard for began to pay off in games, and it was effortless when he dialed into that TRUST of his abilities and got out of his own way.

Craig Sigl’s work with youth athletes has been featured on NBC TV and ESPN. Get his free ebook: “The 10 Commandments For a Great Sports Parent” and also a free training and .mp3 guided visualization to help young athletes perform under pressure by visiting: MentalToughnessTrainer.com.