Did you know you could use TeamSnap to manage multiple teams for multiple kids with just one login? Susan Dukes, TeamSnapper and mom extraordinaire to two young athletes in Tyler, Texas; learned how easy it can be this summer.

Susan’s son began playing club lacrosse at his new charter school, and the coach asked all parents to sign up and use TeamSnap as part of the team management process. Although she’d never used team management software before, Susan says she found TeamSnap to be “the easiest user-friendly tool.” In fact, Susan says she was so impressed she recommended it to her daughter’s 50-athlete gymnastics booster club, the fundraising arm for the gymnastics team. 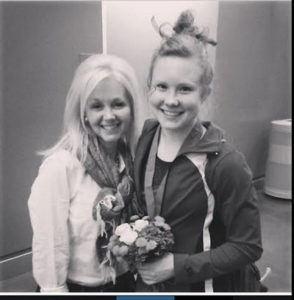 Susan and daughter Sidney after a gymnastics meet.

“The organization of the app is revolutionary,” she says. “What could have been a difficult app was created with simplicity in mind.”

Susan’s children have participated in many different sports over the years, but this was the first time she tried sports team management software. In the past, coaches sent messages through different sources, like text, email and paper notes, and she says she often felt lost and disconnected when the occasional note wasn’t passed from child to parent or she missed information about practices, events or games. 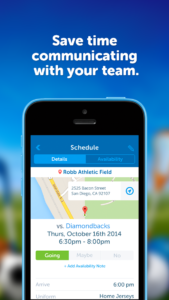 Susan says she finds the email reminders and roster feature particularly useful and loves that she’s able to log in to one place where she can access both of her children’s teams. Because she uses her iPhone for so many things, she finds the ability to sync both of her children’s schedules to her iCal a huge plus. She used to keep a folder for all the communications from the coaches for her daughter’s gymnastics booster club but now can access everything she needs on her phone, whenever she needs it.

“No more papers to keep up with,” she says. “It is so nice to have everything at the touch of a button!”

So how do you manage all of your kids’ teams in one place like Susan? Well, the first step is getting your teams to adopt TeamSnap, of course (check out our free 21-day trial!). Then, make sure you enter the same email address for each team, so when the coach sends invitations to “join” the team, they’ll all go to the same address. Once you join a team, it’ll automatically be added to your “My Teams” dashboard. Even if yours isn’t the primary email address on your child’s roster, as long as the coach sets up additional contacts, you’ll still be able to access each team all from the same place. It’s just that simple.

Stephanie Myers is the Content Manager for TeamSnap, managing such content as this blog, the TeamSnap newsletter and much more. When she’s not being the boss of content, you can find Stephanie playing competitive skee-ball
in Austin, Texas. If you’re a TeamSnap customer who would like to volunteer your story for the TeamSnap blog, please contact Stephanie at support@teamsnap.com.