“Practice? We talkin’ bout practice?” … No, we’re talking about fundraising! 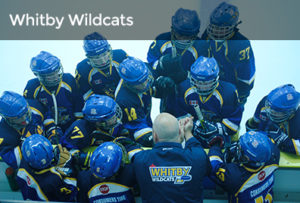 Craig de Blois is a dedicated hockey parent. He wants the best for his son and his son’s hockey team. So in addition to being the coach of the team, he joined the committee that no one puts their hand up for — the fundraising committee. But like so many other parents, he is frustrated with traditional fundraising, so he set out to make a difference.

While looking for easy fundraising ideas, he came across RAISE THE GAME™ powered by Under Armour. In 45 days, the Whitby Wildcats Minor Atom AE team raised over $2,000. We sat down with Craig and asked him to share his team’s experiences with us:

Anything you can think about, we’ve done it! We’ve gone door-to-door selling chocolate bars and calendars, collected beer bottles, sold meat, raffle tickets and entries to NHL pools. Some help us raise more money than others, but it is typically difficult to get the whole team involved with all of these programs and the effort most often outweighs the return unfortunately.

I really liked the feature that allowed me to build a fundraising team online. It was really easy to get all the parents involved with this program because all they had to do was sign up online and sell the offers by email. We had 27 parents sign up and even had some fun with it. We created a group challenge that pitted moms versus dads to see who could raise more money. The losing team had to sing a karaoke song at the team Halloween party, and the winning team got to pick the song. It looked like the dads really didn’t want to sing because they beat the moms handily!

Absolutely. Fundraising will always be an unfortunate reality we must face if we want to travel for tournaments or get extra ice-time for practice but RAISE THE GAME™ made it much easier and more enjoyable than ever before. Our family and friends shopped with Under Armour and other retailers that people actually wanted to buy from and we earned great commissions off each sale. It was also very effortless because the entire program was online. We didn’t have to stand outside collecting bottles or go door-to-door selling anything, that was a major benefit.

Because we raised more than double our average fundraiser with RAISE THE GAME™, we can afford to sit out some of the other fundraising programs we had planned. We’re already planning another RAISE THE GAME™ campaign leading up to Christmas to take advantage of the holiday shopping season!

Brian is the Fundraising Experience Manager at FlipGive. He spends each day speaking with fundraisers and trying to find solutions to make fundraising not suck anymore! In his spare time, Brian is busy being the best uncle ever!