By “Koach Karl” Dewazien, author and producer of soccer resources for all youth levels.

“Encourage your players to juggle every day … In time, their ball control problems will go away!” 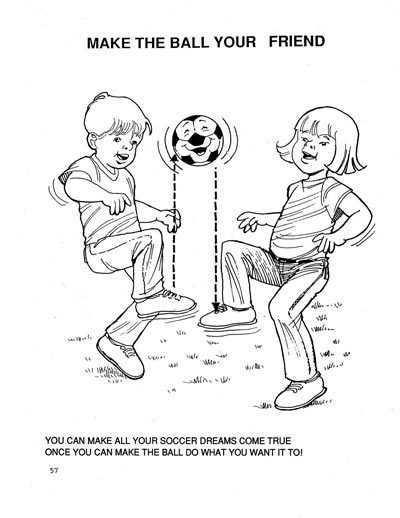 Unusual young players are able to toss the ball to either instep and are able to tap it back into their hands. These rare individuals are fortunate in having developed their eye-to-hand-to-foot coordination and will love to repeat the sequence because they are successful. These players often develop and fine tune their control of the ball, very quickly resulting in truly loving to play the game. They need to be challenged toward eliminating the “catch” in the sequence, resulting in “Right foot laces; Left foot laces; Repeat sequence!”

Usually young players are able toss the ball to either instep but have it glance out of control for them to chase. These typical individuals are unfortunate in that they have not yet developed their eye-to-hand-to-foot coordination and will hesitate to repeat the sequence because they are unsuccessful. These players seldom develop and fine tune their control of the ball which may cause them to dislike playing the game. They need to be in an environment that allows them to be instantly successful so that they can develop their confidence and eye-foot coordination. The key is finding them a surface where the ball will bounce. 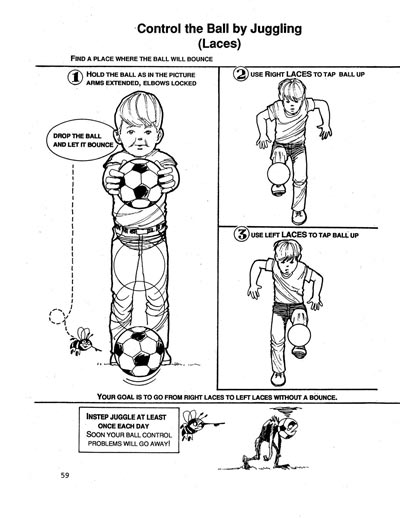 Create a Record Chart that includes the time, date, location and number of successive taps. Ask players to put their chart on the refrigerator or some other “special” place in the house. Then, have them post their scores of daily juggle results. Finally, have them come up with a reward they will give themselves at the end of each week, end the month or whenever they set a new personal record.

Suggest that they organize a Neighborhood World Cup Juggling Contest and that they keep a Neighborhood Chart. Have them contact a local store owner to put the NWCJ Chart in a “special” place in the store. Have the players post their scores of the daily results. Finally, ask the owner to put a picture on the wall to the winner at the end of each month.

In time, success in juggling may develop and fine tune their control of the ball, resulting in the beginning of a love affair with soccer.

Koach Karl (Karl Dewazien) is the former State Director of Coaching for the California Youth Soccer Association (CYSA), Author of the Internationally Published FUNdamental SOCCER Books Series, Producer of the highly acclaimed ‘9-Step Practice Routine’  DVD. He can be reached at: cysakarl@comcast.net  or http://www.fundamentalsoccer.com.