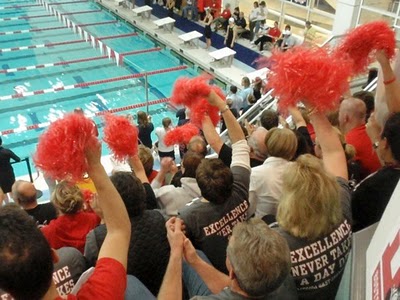 Maybe you’re a seasoned veteran with many years of schlepping your children to multiple youth sporting events under your belt. Or perhaps you’re entering this spring sports season as a ‘newbie’, with a youngster eager to play T-ball for the first time. Either way, you’re likely to find yourself in the stands with other parents for the next few weeks, and I guarantee you it’s not all going to be fun and games. Some of the parents will scream so loudly, you’ll start bringing earplugs to the games. Others will drive you to bring a roll of duct tape!

If you have found yourself next to the parent that is consistently leading cheers and offering positive encouragement, then you know that there is a more effective way to show your spirit. What are the basic guidelines for parents in the bleachers or on the sidelines, so the kids can play their best, coaches can be left to coach, and other parents can enjoy the game?

As one of my son’s coaches put so well, the parents’ job is to cheer and the coach’s job is to coach. What is the difference? Plenty. When a parent’s voice is heard by players on the field, it should never include a verb. Verbs imply coaching: “Go to the ball!” “Kick it!” “Hit it hard!” “Run faster!” All of these phrases are, in essence, coaching. And parents should leave the coaching to the coaches.

So what should parents say? “Great goal!” “Nice play!” “Beautiful pass!” “Awesome throw!” These are all positive statements that show encouragement and support for the players—and the coaches—without inserting their particular opinions and strategic advice into the game.

Another quick litmus test to determine if your ‘cheer’ is appropriate is whether it is during or after a play. If you’re yelling something during a play, it’s probably coaching not cheering, and therefore, better left unsaid. In fact, I’ve seen many instances where a parent yells an instruction that contradicts that of the coach—and the player listens to the parent instead. The result? The ball sails right past the player while she strives to listen to her father and the other team scores.

2. Cheer for the Entire Team, Not Just Your Child

So you just read that bullet and said, “Duh!”, but you’ll be surprised how many parents, even at the high school level, do this. It’s like fingers on a chalkboard to me. I can’t tell you how many times I’ve sat in the bleachers, listening to a parent praise his or her child and then say, “Well, if the outfielders could just catch the ball, my child’s ERA would be so much better” or something similar.

Remember, team sports are just that, a team effort. As the old saying goes, “There’s no ‘I’ in team.” When you cheer only for your child, you’re actually telling them that they are more important than the others on the team, or that their individual effort is what matters. That’s not the goal of – or the lesson we want our children to learn from – team sports.

So set the right example. Cheer for everyone. Even the other team, when one of their players makes a spectacular play.

We’ve all heard the parent who says, loud enough for the coach to hear, “Peter can’t play center forward. Why doesn’t he put in MY son?” Or the parent who is even more direct and walks over to the coach demanding, “Why didn’t you give Hayley more playing time today? She sat on the bench more than anyone else.”

It should go with out saying, but never, ever yell at the coach. If you have anything to say to the coach—about the game in general or about your child’s playing time—do it away from the field. First, wait a day to get some perspective. Often, you’ll realize that whatever seemed so important during or just after the game really isn’t so bad. But, if you still feel you need to discuss the issue with your child’s coach, call her up and have a conversation. Don’t do it by email. There are just too many ways email can be misinterpreted.

Finally, remember that it’s a game. It’s about a group of people – children, coaches, referees, and yes, parents, too – choosing to spend their time doing something they enjoy. Don’t ruin it for everyone by losing that perspective.