The Life of a Sports Parent

Looking back, my life as a sports parent is one of my fondest memories. If you’ve ever experienced it, you know that it requires a great deal of sacrifice: Waking up in the predawn hours on a frigid weekend morning … often driving a considerable distance … not to mention the time and money involved. As my son and I would rush to his game, I’d ask myself over and over, “What am I doing awake at this hour when I could be back home in my nice warm bed?” All I would think about then as we pushed toward the venue in my still-to-be-warmed car was how, where and when I’d get to savor that first cup of hot coffee.

Depending on how late we were running, the arguments would soon ensue: Should he start the dressing process in the car? Or wait till we get to the locker room and possibly miss the beginning of the game? Since I was behind the wheel and thus had little leverage in the matter, my son would convince me that he’d be ready on time and so I’d let him be. But being the chatterbox he was (and still is, to this day), he’d just barely make it. 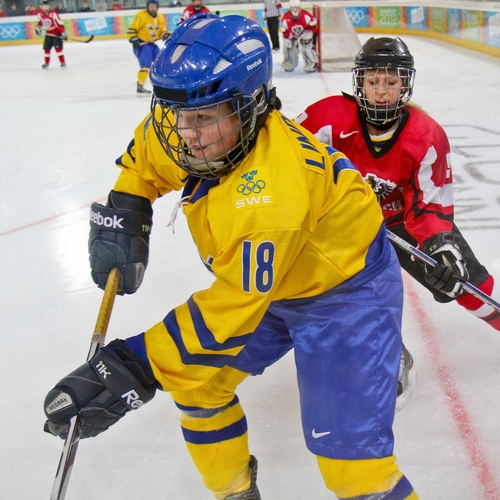 During his hockey-playing days, once we’d arrive at the rink the challenge of getting my son into a game-ready state would unfold. As he sat on the locker-room bench in a semi stupor, I’d prod, plead and beg him to take some interest in getting suited up. Last but not least were the skates. Just when my lower-back pain from those days of teaching him how to skate had finally gone, I found myself hunched over my kid once again while I laced and tied up his skates.

Finally, the coach would enter the locker room and announce that the game would soon begin and to get out there for warm ups. Often, my son and I would still be in the locker room, haggling over the last piece of equipment when the buzzer would sound, signaling the game was about to begin.

As he’d trudge to the bench, I’d find a seat in the stands … and feel my heart swell with pride as I watched my son try his hardest to score a goal.

Being the parent of a goalie, as my younger son was during his teens, would present a different set of challenges. There was of course the higher cost of the equipment and the lengthier time it would take for him to get ready for a game. But what struck me the most was how much responsibility and pressure would fall on his shoulders in determining the outcome of a game. While I would take my place in the stands to watch my older son skate in his games, I chose to stand at ice level, as close as I could get to my goaltender son. My reasoning for that was twofold: first, I thought that by being there alongside him I’d somehow send some positive karma his way; second, it was my way of avoiding the negative comments I’d hear from some of the other parents whenever he’d miss a save.

Days between games were another matter entirely. There were those school-night practices that would have us balancing practice with homework and dinner. But whatever strife I experienced with practice nights somehow disappeared as we eagerly looked forward to the game to come on the weekend.

And as silly as it may seem now, what I especially enjoyed back then were those big post-game breakfasts of pancakes and eggs … and most of all the times we’d share during those long drives to and from his games and tournaments. Those memories will last a lifetime.

Now that my sons have grown up and are self-sufficient young men, I no longer have to deal with the hustle and bustle of getting them dressed and ready for sports. These days, however, there is still the rush of getting to the game on time, only now it’s for the three of us to suit up and play together on the same team in our rec league. It is truly a blessing to be able to play sports with your kids, but still, I miss those days.

Warren Tabachnick was a hockey dad who now has the privilege of playing sports with his grownup sons. Published by permission of CrossIceHockey.com—Where Rec Hockey Lives. © 2014 Digital Media Publications, Inc. All rights reserved.