Once a week, my family of four drops everything for 30 minutes of ritual ‘gathering around the hearth’. The moment? Wednesdays at 9pm watching the hit TV show, “Modern Family”. In last week’s episode, Jay gets upset at Gloria for applauding their son’s not-so-artistic Thanksgiving table centerpiece and says, “These days, kids get a medal just for crossing the street!” 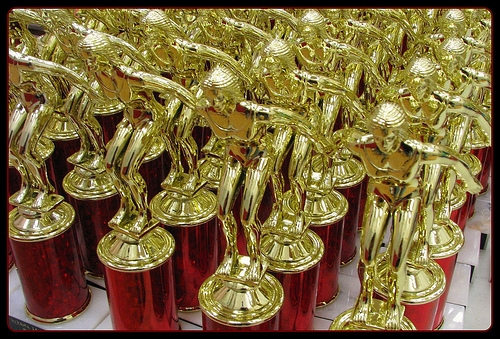 While a little extreme, sadly Jay is right. And he’s not the only one to comment on what I like to call the “Trophy-For-Everyone” phenomenon: I recently came across a blog entitled, “Soccer Has Ruined America”, in which the author, Todd Dewett, actually blames the overzealous distribution of ‘hardware’ in youth soccer for mediocre workplace performance later in life – and the current state of our economy. His tongue-in-cheek solution? Eliminate youth soccer.

Let’s be fair: it’s not just youth soccer that embraces trophyism. It’s every youth sport these days. As a parent, it drives me crazy. It should drive ALL parents crazy.

My feeling is that trophies, medals, or other ‘hardware’ are only for the winner. Period. They are the reward for working hard and winning. Where is it written that life is fair? How would these kids have fared storming the beach at Normandy on D-Day if they had been raised in today’s permissive “everyone’s a winner” mentality? Is it possible that the entire course of world affairs and events may have been different if today’s youth had to fight World War II?

To all the parents who say, “my child really loves getting the bright, shiny trophy just for participating on the team,” I say, “ask your child which one or ones on her shelf MEAN something to her.” You might be surprised at the answer, especially if you are one of the proponents of the ‘trophy-for-everyone’ movement.

I asked my son, who is now 15 and has played baseball since he was 5. His desk is littered with trophies and you can’t see what’s on his bulletin board because of all the medals hanging off of it. Ten years of hardware and what does he covet the most? It’s not even on the shelf or the board: it’s the t-shirt that says “2009 NOLL/SOLL Juniors Champions”. Why? “We fought hard to come back against the best team in the division and we won!”

Therein lies the key. Fighting hard. Coming back. Winning. Taking pride in the accomplishment. Achieving a goal. Almost three years later and that t-shirt evokes all those memories – and it reminds him that hard work pays off, which is a great life lesson. He (and his team) worked hard and won, against daunting odds. What makes it special is that it’s something he earned, not something he was simply given because he showed up. That’s a big difference.

I think it’s time we hit the reset button in youth sports and stop the mediocrity bred by the participation trophy or medal. We already have a generation of young adults who expect promotions after two months of ‘hard work’ and raises for showing up to the office every day for three weeks. Is that what we want for this generation too? I know I don’t. I want my kids to learn the value of working hard and earning the prize, not just be handed a reward for doing something they should have done anyway—show up and play.

Oh, and about those 2nd Place trophies and “Consolation Winner” medals (what IS that, anyway?). They’ll simply continue collect dust in my son’s room until he leaves for college, at which point I’m sure we’ll throw them away. But he’ll be taking the t-shirt with him.