GOOOOOOAAAAAALLLLLLL!!! How exciting is that moment during a soccer game? Actually, since soccer is a game of such quick intensity and low scoring, each moment has the potential to provide amazing windows of drama that for an action shooter are like pure photo gold. To make it even better, soccer has three distinct advantages for new sports photographers: 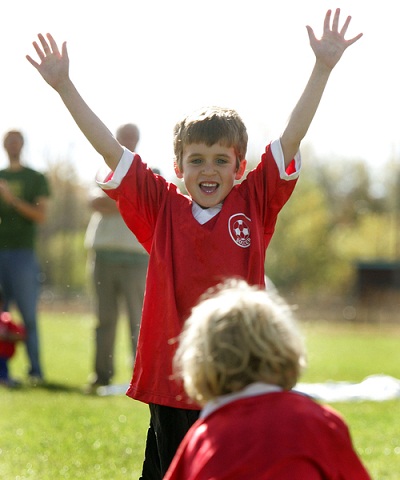 Soccer is a very fun game to photograph. Unlike some other sports that constantly stop and start, soccer keeps moving and hardly ever stops. This increases your chances for great photos simply based on the minutes of action per game.

Here are some of my most common suggestions for those photographing soccer...

Angles and Backgrounds
The number one suggestion I have for parents or fans photographing soccer is to move away from midfield and get down to the corner or behind the end line. When you photograph from midfield you have two things working against you. One is that the background of your photos becomes really cluttered with opposing team parents, umbrellas and folding chairs on the opposite end of the field. This makes for a very busy scene and your photo will lack focus. The second reason is that you want the action coming straight at you rather than going side to side. Remember, you want those faces and eyes captured whenever possible. The only time I move towards the middle of the field is when I need some photos of the goalie. Which leads me to...

Catching the Goalie
The goalie (or keeper, if you prefer) can be a tough player to photograph. Although the goalie doesn't cover as much ground as the rest of the team, it can be tricky to get good action shots. You need to be patient and follow them through your camera lens each time the ball nears the goal. If you are lucky, you will get a nice blocked shot photo, although those are rare. More likely you will get photos of them calling out to the other players, throwing the ball, or kicking the ball. If you want a cool action photo, shoot them during warm ups. Just don't tell anyone that is how you caught that cool diving block shot!

Follow the Bouncing Ball
For players, most of the game is spent looking down at their feet. Thus, capturing those times when the ball is bouncing are wonderful photo opps. My favorite soccer photos have been taken when a player lifts his head to watch the ball as it bounces in front of him. Also, look for those times when the dribbler is looking up field for a pass. Next time you look at a soccer photo, notice if they are looking up or down at the ball. 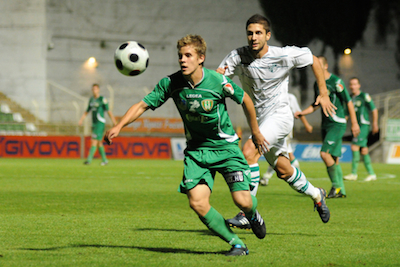 How Low Can You Go?
To counter all that looking down, another thing that helps soccer shooters is to get down low. Sitting or crouching helps to see more faces, plus it allows you to clean up the background and making the players look more powerful.

Game Flow
Stay flexible during games as you are shooting. There have been times when I will secure a spot down in the corner and get all ready for my team to come running towards me, only to realize that all the action is happening down at the other end of the field. Your team may be spending more time on defense than offense. Adapt to the game. Since soccer moves so fluidly, you can't chase the action up and down the field. However, pay attention to the flow of the game and place yourself where most of the action is happening.

Vertical or Horizontal
Frame your photos to show the player's full body so you include the ball in the shot. By shooting horizontally, you will need the action to be far enough away so that you don't chop off heads or feet. This allows you to get some great interaction between the dribbler and the defender. Once the action moves closer, spin your camera vertical and isolate the player with the ball.

Headers
These are harder to shoot than you would think. Capturing a player heading the ball requires some fast camera maneuvering. You need to look up and find the ball in the air, estimate where it will land, and then quickly pre-focus and prepare to shoot once the players go up for the ball. A lot of it depends on luck, but when you get it, they can be an awesome moments of pure emotion and tangled bodies.

Corner Kicks
This is one of those rare moments where the action pauses briefly and you can be sure where the ball will go next. The player making the corner kick will most likely try to lob the ball into the crowd right in front of the goal. Don't follow the ball. Look through your camera and frame up the players in front of the goal. Believe it or not, you can tell from their eyes as to who the ball is coming to. Snap freely and don't over think it.

These tips should get you going. Have a blast and don't forget to share your experiences on the TeamSnap Facebook page. Cheers!