Did you know that Track & Field finishes in the top three for youth participation in the United States? High School Track & Field is typically only topped by Football, beating out such high profile sports as Soccer, Baseball and Basketball. That means there are a lot of kids participating in Track & Field events around the world on a daily basis and a lot of parents out there attempting to document their young athletes. Would you like to have some tips for photographing those events? Well I am here to do just that.

The first thing that comes to mind about shooting a Track & Field event is to stay heads up at all times. This is not a sport you snap casually. You need to think about where you are standing and pause before you start moving. I can’t tell you how many times I have nearly wandered into a sprinter or narrowly escaped being speared by a javelin. You have starter guns popping, sprinters blazing, hurdlers leaping, distance runners galloping, jumpers and vaulters flying and hammers, discs, javelins and shot puts raining down from on high. It is like photographing a 10 ring circus! The action is divided into Track, Field, Combined and Road events. While I can’t cover them all, let me jump right in with some tips for capturing some of the action.

Sprints – As you can imagine, these are fast and furious. You do not have time to change positions, so you need to decide where to place yourself. I like to shoot the finish. I will find a position at the finish line so I am catching them coming straight at me and not shoot until they are about the cross the line. Leave enough room so the runners don’t crash into you of course. The drama and lunge at the finish plus the celebration is brief but dramatic. An optional photo is with a wide angle from down low a few feet in front of the starting line. 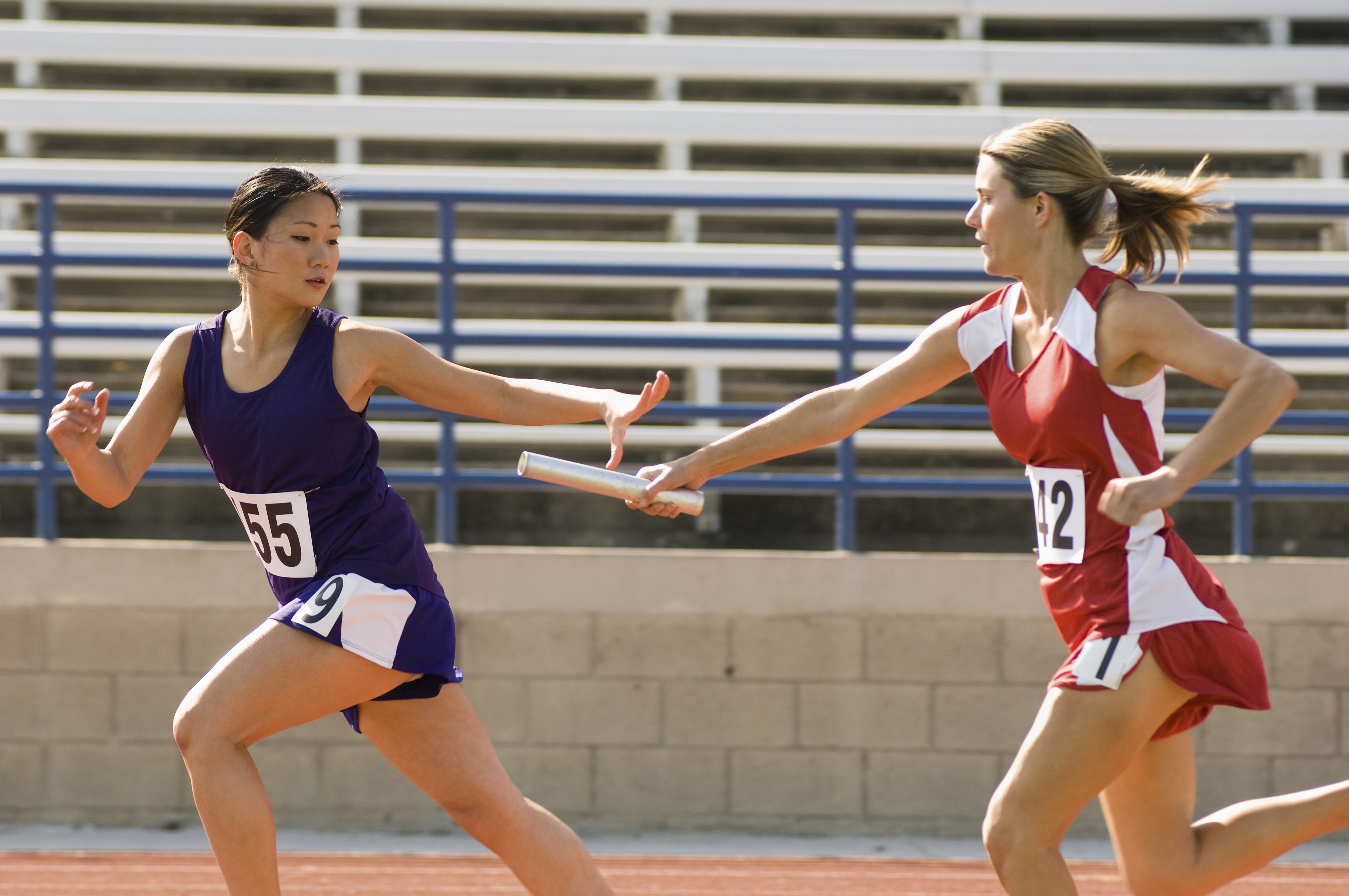 Middle and Distance – Depending on the length of the race, you have the opportunity to capture a few different looks of this event. If the race involves multiple laps, you have the option to catch the runners in the blocks plus some action as they circle past you. I like to plant myself on a curve so I can get some separation as they come around the bend. If the race is long enough, you can even capture the finish.

Hurdles – This event allows for a dramatic pose as the runners sail over the hurdles. You can either try to catch them straight on with a long lens or get parallel with the hurdle, get down low and capture them as they clear the gate. These events are typically short races and even the 400mm doesn’t allow for multiple angles. Utilize your motor drive and let it rip as they come across.

Relays and Steeplechase – Relays are exciting as runners attempt to pass a baton. However, you need to place yourself several yards in front of the runner about the receive the baton. By the time the actual handoff occurs, they are several yards from where they started. It can also be very crowded. Steeplechases are fun as you get the splash of the runner hitting the water during the water jump. Crank up your shutter speed to really freeze those water drops. Very dramatic.

Long and Triple Jumps – My favorite way to shoot this is from straight ahead of the jumper. I get down low on my stomach and start shooting a few seconds before they hit the sand. The low angle allows for a clear shot of their concentrated expressions and flying sand. 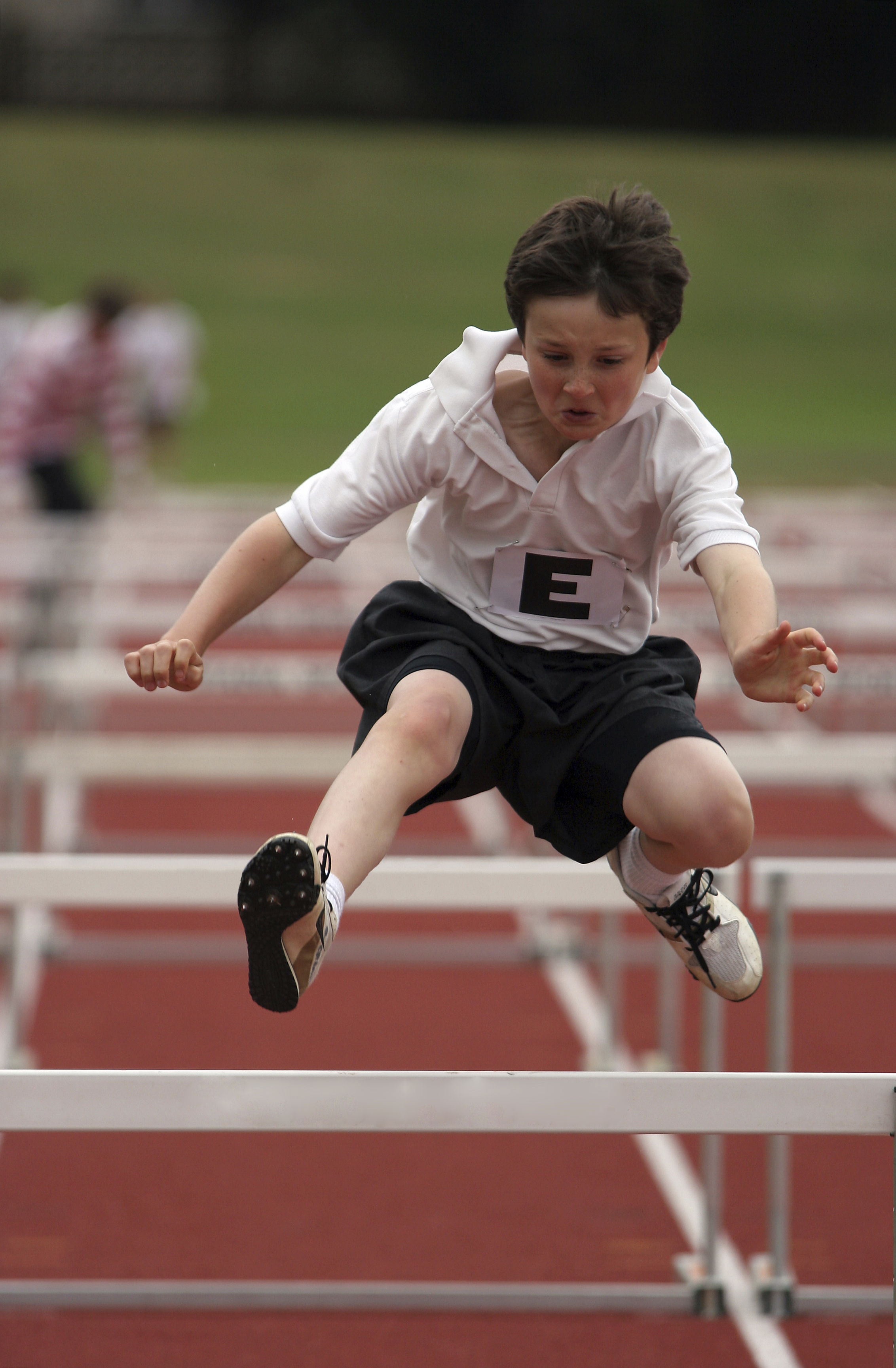 High Jump – I actually prefer shooting this event from the same angle from which the athlete starts running. That way you see their whole transition from the start of the jump to the top as they contort their bodies over the bar. If you are on the other side, you only get the top of the jump and the drop to the pad. However, for a change of pace the head first curl over the bar from the far side can be terrific––just harder to capture.

Pole Vault – This can be a tough one, but it does lend itself to a variety of angles. A wide angle lens down low at about the point where they start to ascend can be a nice option. I have also snagged some nice shots by going up to the higher levels in the stands, therefore putting myself at a similar height to the bar at the top. You capture an unusual view of the body curling over the bar rather than always shooting up at the action where the bright sun can become an issue. One more angle is straight ahead as the athlete runs towards you, before planting their pole.

Throwing events – These can be some of the most challenging shots to get because the best angle is from straight on, but that is also where the shot put, discus, javelin and hammer is headed. This can be extremely hazardous to your health. For shot put, I tend to pick an angle from the front and off to the side depending on if the thrower is right or left handed. The spin is hard to catch but the final push can be exciting. The discus and hammer toss is so very hard to capture because they are normally within a C shaped net enclosure. This is one of the hardest events to capture unless you have a super long lens and even then you risk injury. The javelin thrower can be captured as a horizontal shot from the side showing the muscular exertion during the last second before the throw.

I realize I have not covered every track and field event but hopefully, this will give you enough to get out there and give it a try. Once again, heads up. This sport requires great awareness of your surroundings and some serious forethought before changing positions. Have a blast…but be safe!