What Happens When The Coach Becomes The Bully

As youth sports parents, we stand up for our kids when they are being threatened or degraded.  If an opposing player or parent starts to talk trash to our son or daughter, we let them know that’s not OK. If one of their own teammates constantly harasses or picks on them at practice, we speak to the coach.  But, what if the coach is the bully?  What if we hear about profanity-laced tirades, insults or physical “motivation” directed at the team or certain players?  For those of us brave souls who confront the coach about his or her behavior, we’re often met with a variety of excuses, rationalizations and half-hearted apologies - only to hear about recurrences soon after.

Bad behavior by coaches has become a serious problem in youth sports. Dr. Nancy Swigonski, a pediatrician and professor of public health and pediatrics at Indiana University School of Medicine, recently reported in the journal Pediatrics on the extent of the problem and the categories of denial heard from coaches. In a 2011 study, researchers interviewed 6,000 young adults between 18 and 22 about their youth sports experiences growing up. Amazingly, 1,500 of the survey respondents had endured at least one episode of “emotional harm” inflicted by a coach. Another study of 803 athletes, in 5th through 8th grades, found that 45% of them had been the target of verbal misconduct, including insults and name-calling.

Even in the last month, two bully coaches have been in the news headlines. In April, Boston University’s head basketball coach, Kelly Greenberg, was forced to resign after four scholarship players said they quit the team because of the emotional verbal abuse inflicted on them. In her parting statement, Greenberg disagreed, “I do not agree with some of the findings of the review panel regarding my coaching style, which was intended to produce well-rounded athletes and a winning team. However, given all that has transpired, I do not believe that it will be possible for me to continue as an effective coach at Boston University.” 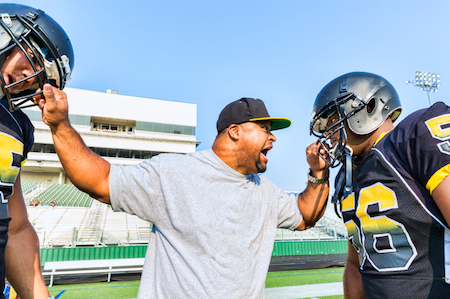 According to Dr. Swigonski, that type of logic, moral justification, is one of the four common excuses used by abusive coaches defending their coaching style. “Moral justification manifests itself through normalization statements, like ‘all coaches lose it once in a while’ or ‘this is how we’ve always done things and we win games," she writes. “By arguing that the behavior is normal, they invoke the logical fallacy that common and good are equivalent. Unfortunately, when a culture of bullying is accepted within the team or in the school, then it may actually seem normal, and bullying of athletes tends to be rationalized and ignored.”

Then there is Mitch Williams, former MLB pitcher nicknamed the “Wild Thing”, who set a new low last week for in-game behavior while coaching his son’s U10 baseball team. Those attending the game reported that Williams repeatedly insulted the opposing 10 year-old pitcher, his coaches and the umpires, then ordered his pitcher to throw a beanball at his counterpart when he came to bat.

Once his actions became public, Williams explained himself on Twitter using another common rationalization tactic, described by Swigonski as a “backhand apology.”  “A typical bully apology might sound like, ‘I am really sorry; I got a little carried away, but it was the umpire’s fault,’ wrote Swigonski. “There are two problems presented. First, the coach is minimizing the harm by saying ‘a little’; second, he places the blame on the victims.”

The third technique used is known as “advantageous comparison”, in other words, “it could have been worse.”  These coaches claim that it was “only” verbal abuse and that they never physically hurt the players. “Even though physical violence was not the concern, the coach shifts the standard of what might be considered inappropriate to downplay the severity of his actual misconduct,” commented Swigonski.

Finally, a coach who truly believes in their technique will just call the accuser’s bluff by challenging them.  “If you don’t like how I coach, you can just quit the team.”  They basically admit to the abuse but then force the victim to choose the next move.  “The bully is not necessarily escalating his bullying behavior, but escalating the situation by presenting the secondary consequences a victim might face by fighting back,” according to Swigonski.

A coach, no matter how famous or successful, should never be allowed to insult, berate or otherwise abuse a young athlete.  As parents, it is our responsibility to advocate for and defend our children from all bullying, even from the most unlikely sources.