For Football Brains, It’s All About Trial and Error

“We just have to get our timing right.” It’s a phrase you hear often now that the football season has kicked off at the pro, college and even high school levels. After not playing together for so long, quarterbacks and receivers have to relearn the intricacies of their pass patterns, synchronizing their movements so that the ball arrives at an exact location at precisely the right time. The variables of speed, strength, environment and defenders constantly change yet, eventually, both players get on the same wavelength. Often referred to as “motor memories”, athletes rely on thousands of practice repetitions to help them instantly adjust to new conditions on the same tasks––throw and catch a ball. Now, researchers at the Johns Hopkins School of Medicine have a better understanding of how we are able to do this.

“In learning a new motor task, there appear to be two processes happening at once,” says Reza Shadmehr, Ph.D., a professor in the Department of Biomedical Engineering. “One is the learning of the motor commands in the task, and the other is critiquing the learning, much the way a ‘coach’ behaves. Learning the next similar task goes faster, because the coach knows which errors are most worthy of attention. In effect, this second process leaves a memory of the errors that were experienced during the training, so the re-experience of those errors makes the learning go faster.”

For over 10 years, Dr. Shadmehr and his research team have been studying how we learn motor skills with the help of a video game with a twist. As test volunteers stare at a computer screen, they control a joystick to move a cursor towards a target. However, the joystick is hidden from their view, so they can’t actually see their hand moving the device. Imagine throwing a football at a target without being able to see your arm. 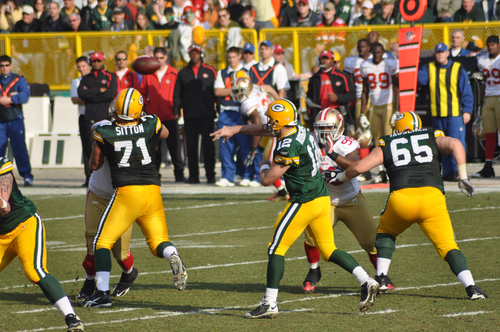 Last year, Shadmehr used this set-up to test what happens how we use visual feedback to adjust our motor skills as we learn. First, they practiced moving the joystick so that a blue dot on the screen reached a red target. Next, he added a secret challenge to the task by making the joystick pull to the left, causing the volunteers to adjust to the right.

After they had learned this new twist, Shadmehr now showed half the group a screen simulation that did not reflect what was actually happening. In other words, they were getting false feedback to their movements, as if they were doing the task perfectly every time. They eventually stopped adding the adjustment to the right, forgetting what they had just learned.

“Our results correct a component of knowledge we thought we understood,” said Shadmehr. “Neuroscientists thought decay was intrinsic to motor memories, but in fact it’s not decay––it’s selection.”

So, from a football perspective, players refresh their motor memories during preseason as new feedback from passing drills provides additional data samples. Continuing with the same experimental set-up this year, the research team tweaked the variables to see if our memories of the errors we previously made helps us improve our technique.

This time, they played with the joystick calibration to slowly move it to the right or left of center, eventually being as much as 30 degrees off. Over time, the volunteers adjusted more quickly to these unknown small adjustments, also known as prediction errors, often without even noticing the change.

Shadmehr is convinced that this is why his own tennis game gets better after the first few points. “I’m much better in my second five minutes of playing tennis than in my first five minutes, and I always assumed that was because my muscles had warmed up,” he said. “But now I wonder if warming up is really a chance for our brains to re-experience error.”

For some QB-receiver tandems, it takes a little more time for each to adjust their timing, movement and motor skills for the new season. As the old saying goes, “repetition is the mother of skill.”