How Shivering In the Cold Burns Fat

Stuck in the middle of this unusually cold winter, many amateur athletes are either staying indoors for their workouts or just waiting for an early Spring to get out and burn off their holiday pounds.  However, it turns out that shivering in the cold actually cranks up your metabolism even better than some exercise.  New research from the Garvan Institute reveals that cold exposure kicks off a biological process that turns energy-storing white fat cells into energy-burning brown fat cells.

Up until 2012, scientists thought that the brown fat we’re born with converts to the more common white fat when we’re young, but recent research shows that most adults have at least some amount of the energy burning brown cells.  Dr Paul Lee, an endocrinologist from Garvin in Sydney, has been investigating how to take advantage of its metabolism boosting properties.

In fact, brown fat cells can burn 6 kilocalories of energy per gram, while white cells do the opposite and store the same amount of energy, which becomes fat as we know it. 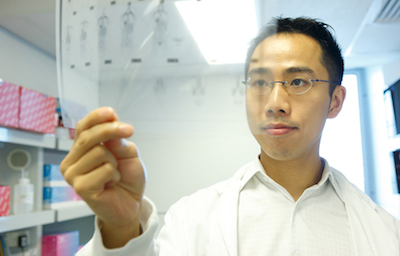 "Excitement in the brown fat field has risen significantly over last few years because its energy-burning nature makes it a potential therapeutic target against obesity and diabetes," said Dr Lee in a press release. "White fat transformation into brown fat could protect animals against diabetes, obesity and fatty liver. Glucose levels are lower in humans with more brown fat."

From previous studies, it was known that both exercise and shivering from the cold causes similar muscle contractions. What Lee wanted to understand is exactly what biological process occurs and how the two activities compare.

"When we are cold, we first activate our brown fat because it burns energy and releases heat to protect us. When that energy is insufficient, muscle contracts mechanically, or shivers, thereby generating heat. However we did not know how muscle and fat communicate in this process."

So, ten healthy adults volunteered to participate in a three session experiment.  First, they took part in an intense workout on a stationary bike until exhaustion. On their next visit to the lab, they did a more leisurely bike ride for one hour.  Both of these exercise sessions were at a comfortable 65 degrees.  For their last visit, the volunteers simply laid on a bed, lightly clothed, while the temperature in the room was lowered from 75 to a chilly 53 degrees over 30 minutes, causing all of them to shiver.

Blood and muscle cell samples were taken before and after each session and special skin monitors were used to detect the first signs of shivering.  They found that both exercise and shivering produced the same two hormones.

The study results appear in the journal Cell Metabolism.

"We identified two hormones that are stimulated by cold -- irisin and FGF21 -- released from shivering muscle and brown fat respectively. These hormones fired up the energy-burning rate of human white fat cells in the laboratory, and the treated fat cells began to emit heat -- a hallmark of brown fat function."

Here’s the intriguing news: 10-15 minutes of shivering produced the same amount of hormone production as an hour of exercise, kicking off the beneficial transition of white to brown fat cells. It seems the muscle contractions, whether from biking or shivering fired up a primitive chain reaction in our cells.

"We speculate exercise could be mimicking shivering -- because there is muscle contraction during both processes, and that exercise-stimulated irisin could have evolved from shivering in the cold."

Dr. Lee will use this new information to further his research into ways to fight obesity.  But, for the rest of us, its good to know that a little bit of teeth-chattering can help with those extra, holiday fat cells.