With another World Series in the books, another baseball season comes to an end. But for many aspiring college and pro players, winter ball in warmer climates is just getting started. Even high school pitchers look for opportunities to keep their arm in shape and improve their velocity before their season starts in the Spring. However, new research adds to the growing evidence that this is the time of year that pitchers need to get away from the game and rest their arms. Otherwise, they risk arm fatigue and injury at pitch counts over 100 per week.

Physicians are used to seeing pitchers in their exam rooms with complaints of shoulder pain but sometimes even they have difficulty diagnosing the exact cause of the injury. "We kept seeing this injury over and over again in young athletes who come to the hospital at the end of the baseball season with shoulder pain and edema at the acromion on MRI, but no other imaging findings," said Johannes B. Roedl, M.D., a radiologist at Thomas Jefferson University Hospital in Philadelphia.

Known as acromial apophysiolysis, the injury results when the acromion bone at the top of the shoulder doesn’t form properly during the teenage years.

"We believe that as a result of overuse, edema develops and the acromion bone does not fuse normally," Dr. Roedl explained.

To find out more about the cause, Dr. Roedl and colleagues reviewed the MRI scans of 2,372 patients, aged 15 to 25, who had complained of shoulder pain between 1998 and 2012. Most of the patients were baseball pitchers. A total of 61 patients had pain at the top of the shoulder and an incomplete fusion of the acromion.

Armed with these results, the researchers then looked at the pitching history of 106 of the patients, both injured and non-injured. As expected, 40% of the injured pitchers had thrown over 100 pitches per week in the previous year, while only 8% of the control, uninjured group had exceeded that rate.

Their research was recently published online in the journal Radiology.

Without proper rest, the acromion bone is never able to properly fuse, leading to a higher risk of rotator cuff injuries later in life. Dr. Roedl, as well as the American Sports Medicine Institute, recommends a weekly pitch count less than 100 with no more than two games on the mound.

"Among high school athletes, pitching is the most common reason for shoulder pain," Dr. Roedl said. "Pitching places incredible stress on the shoulder. It's important to keep training in the moderate range and not to overdo it."

Despite the competitive push to play one sport year-round, Roedl encourages parents to mix up sports so that different muscles and bones are used.

"More and more kids are entering sports earlier in life and are overtraining," he said. "Baseball players who pitch too much are at risk of developing a stress response and overuse injury to the acromion. It is important to limit stress to the growing bones to allow them to develop normally." 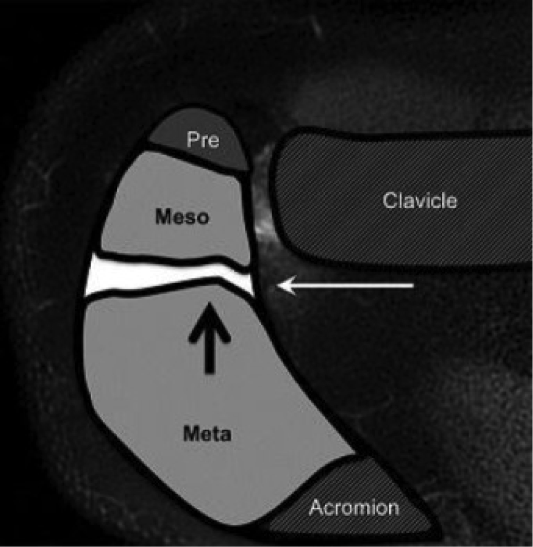