What You May Not Know About Sports and Energy Drinks

It’s hard to watch any sports event on TV or in person without seeing the ubiquitous advertising for sports drinks, like Gatorade or Powerade. Or continuous marketing for energy drinks like Red Bull or Monster. Their link to pro sports and consequently to millions of adoring young fans/athletes is everywhere. The products themselves seem harmless, no worse than sugar-filled, caffeinated sodas; so, parents stock the ‘fridge and kids down gallons of them before, during and after their sports activities. However, several groups of scientists and a consumer advocate have made it a tough year for the sports drink industry.

Back in 2012, Sarah Kavanagh, a teenager in Hattiesburg, Miss., checked the label on her bottle of Gatorade.  One ingredient, brominated vegetable oil (BVO), caught her eye so she did some research on it.

“A page popped up with a long list of possible side effects, including neurological disorders and altered thyroid hormones. I didn’t expect that,” she told the NY Times.

BVO contains bromine, an element used in flame retardant products.  As a food additive, BVO has been banned in Japan and the European Union based on animal and human studies showing possible harmful side effects.  In the U.S., the FDA approved BVO back in 1977 on an interim basis until more research could be done.  Thirty-seven years later, the additive is still on the interim list.

Not happy about this, Sarah created an online petition at Change.org to convince Pepsi, makers of Gatorade, and Coca-Cola, makers of Powerade, which also contained BVO, to remove it from their products. Earlier this month, after the petition gained over 200,000 signatures, Coca-Cola agreed to remove BVO from all of its products. Pepsi, which had taken BVO out of Gatorade last year, is working towards replacing it in the rest of their drinks. 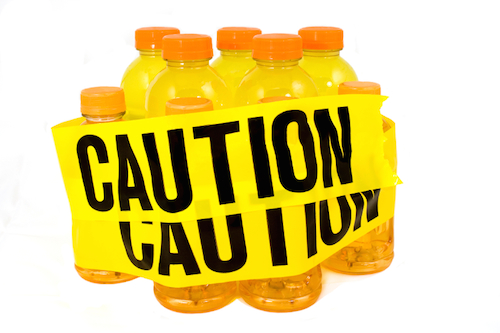 While these changes make sports drinks a little healthier, many kids are also consuming more energy drinks, like Red Bull and Monster. The name itself sounds positive; who wouldn’t want more “energy” in their day? The problem, according to an Iowa State nutrition professor, is that there is no way to know how much energy, in the form of caffeine and other ingredients, is in each can because of weak product labeling.

“These drinks have this connotation that they are a performance enhancer because they’re an energy drink. Whether that performance is academic or physical, that’s the perception,” said Ruth Litchfield Ph.D. associate professor and associate chair of food science and human nutrition. “You’re talking about the equivalent of five cups of coffee in one energy drink. And it’s not just youth who are unaware, it’s adults. I’ve seen adults in the grocery store buying these energy drinks for their children.”

Even with almost 500 mg of caffeine, plus Ma huang (also known as ephedra) and guarana as stimulants, the FDA does not require the amounts of those ingredients to be listed on the nutrition labels of energy drinks. This prevents parents from knowing the real health impact of these beverages.

“That amount of caffeine has health implications,” said Dr. Litchfield. “Your heart rate and blood pressure will increase and you’ll have increased risk for arrhythmias. If you consistently consume these for a prolonged period of time, you’re increasing your risk for cardiovascular disease.”

While sports and energy drinks are associated with athletes, many teens are substituting them for soda as their go-to beverage. In the last month, two studies found an interesting correlation between drinking energy drinks and some negative behaviors.

In Minnesota, 2,793 adolescents were surveyed about their consumption of sports and energy drinks, as well as how much they watched TV, played video games, spent time being physically active, slept and smoked. They found that those kids that consumed sports and energy drinks at least once per week also watched more TV, spent more hours playing video games and smoked.

Researchers from the University of Michigan looked at survey data from 22,000 U.S. high school students and found that 30% of the teens had energy drinks or shots daily, with boys consuming more than girls.  Those same kids were also 2-3 times more likely to report recent use of alcohol, cigarettes and illegal drugs.

What do the scientists make of all this?  They’re not sure yet and can’t make a direct cause-and-effect relationship. The U of M researchers did advise, “Education for parents and prevention efforts among adolescents should include education on the masking effects of caffeine in energy drinks on alcohol- and other substance-related impairments, and recognition that some groups (such as high sensation–seeking youth) may be particularly likely to consume energy drinks and to be substance users.”

As with anything, moderation is the best reminder. Parents who understand what’s in these drinks can keep an eye on their kids’ consumption and take action if necessary.