How Are TeamSnappers Using Live!? 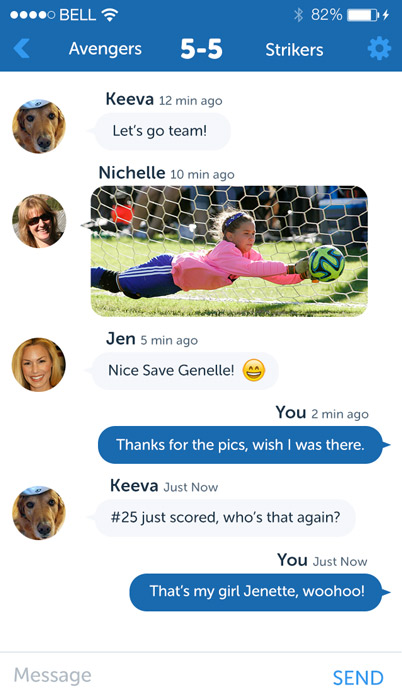 We’ve all been very excited around here since TeamSnap Live! launched. We use the Locker Room to communicate breaking TeamSnap news, like a new cat video everyone just has to see. We’re interested in how you are using TeamSnap Live! though. We told you some TSL stories previously, and now we’re back with a few more.

Do you have a story about how you or your team uses TeamSnap Live!? Email it to support@teamsnap.com and you might be featured on our blog too!

For Those At Home With the Siblings

“On our team, we especially love the TeamSnap Live! notifications. Having the live notifications pushed to our phones saves us from having to continually open the app to see the scores. On our team, those who use Live! the most are those who can’t make it to the game because they’re home with other siblings. We usually text beforehand to see which mom (always a mom, it seems!) is going to the game and is willing to track the scores on Live! Usually, moms will post the score and any additional info (e.g.. power play, who is in penalty box). For those of us at home, we can ask how much time is left and which period they are in. It’s nice to have other parents to cheer with online. We’ll post stuff like, ‘Go Rangers!’ and ‘Hang in there boys!’ Many of us will use emoticons if we have them on our keyboard to add some fun.”

For Travel Games and Tournaments

“Our daughter is on a high school and a travel team. The high school team recently had an away playoff game, and I couldn’t attend because it was pretty far away and I was working. It was really nice to get updates. I was glued to my phone looking for scores. It was nice to be able to tell what was going on while it was going on. I have two daughters who play travel soccer, and often we’re in two different parts of the state or even different states. I obviously could wait to get a report but instead it’s really nice to be able to tell what’s going on while the other was playing. I really appreciate it, and I know I’m not alone. If you have one kid playing a travel sport, chances are there is another one. For families like that, it’s really nice to know what’s going on.”

For Those Who Are Just Out of Reach

“Revolution/Omega is a homeschool Ultimate Frisbee Team out of Cincinnati, a boys’ team and a girls’ team. At a recent travel tournament, there were two field locations, one for the boys and one for the girls. A parent at each field used TeamSnap Live! to update plays and the score so the team at the other field AND our fans at home could keep up with both games. Each team played seven games over the weekend, but we felt like we were all in the same location thanks to TeamSnap Live!”