How Music Helps You Move

If you visit any gym, weight room or running track, you are sure to see the same critical training device being worn by athletes of all ages – a pair of headphones connected to their portable music.  Without it, workouts seem out of sync, longer and more difficult.  Researchers have told us for years that there is a motivational link between exercise and music, but an interesting new study has now discovered that the connection goes even deeper, especially when an athlete can create his or her own beat. 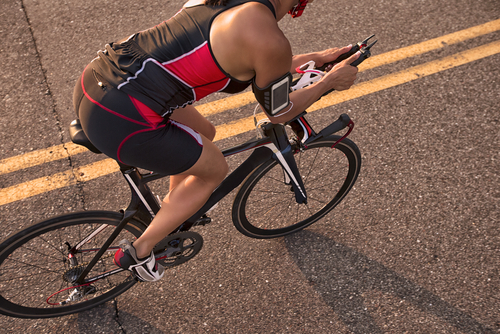 Just listening to music isn’t enough to launch our training workout into high gear; it has to be the right music at the right beat.  For runners, cognitive research has shown that choosing music with a beats per minute cadence that matches our stride gives our steps a rhythm to follow.  Training becomes more efficient with the perception that the effort required is less.  But what effect does music have on strength building sessions or skill building drills?  Would athletes perform better if their movements created the music rather than just accompany them?

Scientists from the Max Planck Institute for Human Cognitive and Brain Sciences in Germany, along with other institutions, took a different track to studying the link by letting the workout dictate the music.

They started by attaching customized music-making kits to three types of exercise equipment, a stair-stepper and two weight-lifting machines.  The music kit would produce electronic, dance-type tones and beats synched to the movements of the machine.  So, the athlete would control the beat, pattern and volume of the music simply by the rhythms of her workout routine.  Lift faster, the music intensifies.  Step slower, and the music matches the effort.

Next, 63 men and women volunteers were divided into three groups.  One group created their own beat with the customized machines.  Another group worked out in the same room while listening to music produced by the first group. The third group exercised with the same machines but with the music turned off.

Throughout all of the workouts, the researchers monitored the amount of force applied to the machines, the level of oxygen intake by the athletes and the smoothness of their movements.  Afterwards, they asked each volunteer to rate their perceived level of exertion from 1-20.

Athletes who created their own music from their movements generated more force, used less oxygen and showed more fluid movements than the other two groups.  They also reported a lower level of exertion.  This synchronization may help explain the historical and positive connection between manual labor and music, like whistling while you work.

“These findings are a breakthrough because they decisively help to understand the therapeutic power of music”, explains Dr. Thomas Fritz, neuroscientist and lead author. “What is more, we believe that this insight has an important consequence in how we view the role of music in the creation of human society. Let’s consider the fact that a variety of rituals are associated with music. A down-modulating effect of musical activity on exertion could be a yet undiscovered reason for the development of music in humans: Making music makes physical exertion less exhausting”.

The study appears in the online journal PNAS.

“This implies that the developed technology is more favorable as a new athletic sports technology, presumably because more emotionally driven motor control occurs with the musical ecstasy,” said Fritz.

While you won’t see these beatbox weight machines in your gym anytime soon, it does signal a new direction for motivated sports training.