Make the Best With What You Have 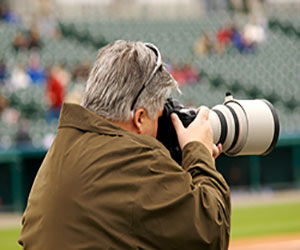 So you are on the sidelines of your son’s lacrosse game. You are proud of your slick camera and fancy new zoom lens and then it happens. That other parent strides by with a big shiny lens that makes yours seem like something you found in a cereal box. You take your gear and quietly slink back into the bleachers to shoot discretely from the shadows.

OK, so I am exaggerating a tiny bit, but I think you get the point. It’s what photographers call Lens Envy. We have all experienced it at some point in our photography lives. So let’s look at the reality of high end professional gear vs the average photo set up that most parents shoot with. Sure, who doesn’t want to have a 400mm 2.8 lens? But what does that lens really do for the photographer? Here are the two advantages that long lenses afford the photographer; it lets you reach further down the field and it exaggerates the short depth of field.  That’s it. Instead of capturing what is happening in front of you, you can capture things that happen at mid field. The short depth of field is probably the biggest advantage. Check out my article on depth of field to explore those benefits within sports photography.

So how can you capture great action photos if you don’t have that big expensive lens? Easy, wait for the action to get closer to you. It is as simple as that. Instead of taking your photos while the action is at mid field, you wait until the action moves closer to you. To tell you the truth, I have been that guy with the long lens and all of a sudden something fantastic happens right in front of me and I am out of luck. It is too close and my lens is too long. Unless I am carrying a second camera body with a shorter lens (which many sports photographers do) I miss the play. Wait and play to your strengths. Capture the action in front of you. Also, stop and take a look around you and see what is in your range. If you don’t have that super long lens, maybe you can get some great shots of the sideline players cheering or the intensity of the coach or the fans on the sidelines. Maybe your shots include more of the surrounding scene instead of a tight isolated action sequence.

Now there are some people who choose to photograph the action happening on the other side of the field and just crop it in tighter later on their computer. The problem with that is you may capture a cool moment but by the time you crop all the way into the photo, the image becomes grainy and soft that it is fairly useless. Check out what happens when you over crop a photo: 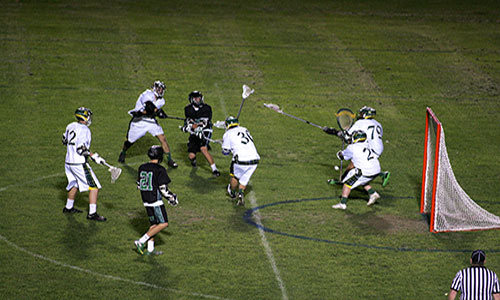 You can see that coming in closer doesn’t always make the photo better. In the original photo you can actually get a better sense of the strategy as the play unfolds. While the tighter cropping shows the shooter in isolation but by the time the cropping came in tighter, the photo got grainier and less sharp and in reality, not really a better shot.

You can also apply this thinking when it comes to other photography elements. For example, every lens has a maximum lens opening.  The wider it opens the more light it lets in, the bigger the lens is and the more expensive it gets. For example, a 200mm f2.8 lens lights a lot of light in and is better for photographing games in lower light (think indoor sports and night games). The same 200mm lens that may only open up to f5.6 has the same sharpness but it just won’t be the best lens for low light situations. The f2.8 lens is going to be a lot more expensive than the f5.6 lens. So what if you have the f5.6 lens? Does that mean you will get worse photos? No, it just means you need to know its limitations. That lens is going to be great on a bright sunny day but don’t make yourself crazy trying to photograph that night football game. Again, play to your strengths. If you do need to use that f5.6 lens at night, you will have a hard time getting your speed up to freeze the action. So don’t try to capture the action. Slow down your shutter speed and capture some sideline drama.

Bottom line. Never feel inferior just because you don’t have the super telephoto or the fastest lens on the field.  It is the classic situation where the grass is always looks greener on the other side of the fence. Embrace what you have and play to your strengths. And isn’t that a great way to live your life anyway?