What You Need For a Great Photo Shoot

So you have your camera. You understand your settings enough to capture some game action. You have your back up batteries, flash cards and sunscreen. You park, walk out on to the field and now what? Do you ever wonder where to begin? Well today, I want to walk you through photographing a sporting event from start to finish in a 7 easy-to-follow steps. Capturing action photos is a blast and isnt' hard. We will use the example of an outdoor event, specifically a soccer match. Although I will speak to the specifics of that sport, most of the principles can be used across many different events.

1. Preparation - Before you even leave the house, you want to make sure you have all the gear you will need for the day. As you will be standing in the middle of an open field and won't have access to electricity, you will want to make sure your batteries are fully charged, you have fully charged back ups and that you have a few empty compact flash cards. Two hours in the hot sun can be brutal, so make sure to grab a hat too. However, try to grab a hat that has a soft brimmed front so it doesn't get in the way when trying to look through the camera. A baseball cap will work backwards, doesn't do much to shade your face, but it is better than nothing.

2. Arriving at the field - The first thing you want to consider when hitting the field is the sun angle. This will determine your most favorable shooting angle. Now if you were simply choosing any game to photograph and had a choice of 3 different game times, you would want to choose those games either in the early morning or late afternoon because the sun is lower to the horizon and less likely to cast dark shadows. But for the sake of this example, let's say you need to photograph this particular game and the game happens at 1:00. The sun angle is not great because it is coming down at a steep angle and throwing deep shadows on the eyes. Your best bet is to walk around the athletes warming up and find the full shadow side. Even though the sun is coming straight down, there will most likely be a side where the face is mostly in shadow. You are looking for evenness in the tones and full shadow is better than hard light and shadows. Choose that angle, get down low (sit down on the field) and take a few test shots. The reason you get down low is to minimize the reflection and glare from the brightly lit field behind the athletes. Ideally, you would want to use ‘Exposure Correction’ in your settings to brighten the shot a bit but for now we will just brighten them on your computer later. Avoid split lighting whenever possible. 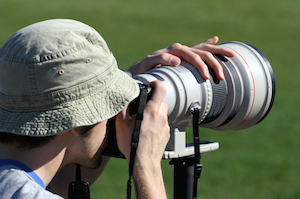 3. Warm ups - While this can be considered “cheating” I like to take some photos of the athletes during warm ups. You can get some nice clean shots of some of those players that may not see the field much during the game. Stay tight so you don't see other players just standing around and only take the shots if they are in their game uniform otherwise your secret is revealed. This is also a good time to get candid team shots and coaching photos.

4. Game on! - From within your back-lit angle, try to get down towards the end line. If your team is heading your way this half, you will have good opportunities to get photos as the offensive players work the ball down the field. During the second half, you will be able to get some shots of the defensive players. Don't forget to grab some shots of the goalie when they are down at your end as well.

5.  Moving positions - Soccer is the type of game you don't want to chase up and down the field. The ball moves too fast and you will miss photos as you try to run with the action. Instead, wait for the action to come to you. Be patient and understand the length of your lens. Don't waste frames shooting photos of the action that is happening beyond your lens capabilities. By the time you crop into them later, they will be too grainy and out of focus. However, if you notice most of the action is happening at the other end, you will have to jump ship and move positions.

6. Capturing emotion - As the score gets closer or nears the end of the game, , the stakes get higher and your chances to capture high emotion increases. Forget your sun angles and move to where you can capture the excitement. Ask yourself, what is the best-case scenario? For example, let's say the game is tied with 2 minutes left. If your team scores, what is the scorer likely to do? They will probably turn and sprint towards their teammates to celebrate. You want to place yourself next to the team sideline, so when they turn to run back to their teammates, you are capturing the craziness head on. Don't forget to capture the frenzy happening with the coaches and other teammates jumping up and down as well.

7. Post game - Even though the final whistle has been blown, don't stop shooting. The emotions are still high. Keep shooting until the emotions start to die down. Now it is time to go home and edit while the event is still fresh in your mind. For tips on this, check out my article of Editing.

The key to capturing the best picture is to place yourself in positions to succeed. You will be in the best location to get top quality pictures, not missing any of the action. Don't forget to have a blast!