The curse of every defending Olympic gold medalist is the competitive pressure to stay ahead of the pack by pushing the limits of brain and body; one less second, one more inch, or, in the case of snowboarder Shaun White, one new trick.  Just after wowing the world with something that has never been seen before on the halfpipe at the Vancouver Olympics, White began the search for the next-level acrobatic maneuver that would get him on top of the podium at the 2014 Sochi Games.  Once the next move is imagined, teaching his brain to pilot his body through it requires repeated practice runs, a few hard landings and, according to new research from MIT, an elastic, flexible network of neurons to store this complex set of new motor skill instructions.

Always the competitor, White released a video through his sponsor, GoPro, on the day after Christmas showing off his latest creation, a frontside double-cork 1440.  That’s four 360 degree revolutions along with two 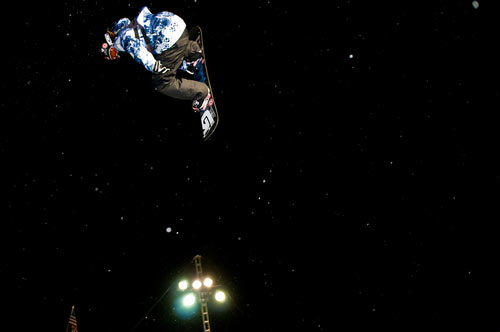 head over heels flips.  That’s 180 degrees more than the double McTwist 1260 that he unveiled in 2010 at Vancouver.

“Just that subtle a change, it throws the whole axis of the trick off,” White told the AP. “It’s a completely different thing.”

Try explaining that to your brain.  To master a new motor skill, like a world-class snowboard trick or throwing a slider or perfecting a chip shot from the rough, a network of neurons has to settle on just the right combination and weights of connections in your brain to be able to form a memory of the skill and let you repeat it consistently.

Then, you decide to up your game by adding a more advanced variation of the movement.  Still using the same set of neurons, how does this new instruction set become encoded without overwriting existing skill programs?

According to neuroscientists, it is a balance between the brain’s ability to be malleable, known as neuroplasticity, and still stable enough to maintain pre-learned tasks.  “Your brain is always trying to find the configurations that balance everything so you can do two tasks, or three tasks, or however many you’re learning,” says Robert Ajemian, a research scientist in MIT’s McGovern Institute for Brain Research.  “There are many ways to solve a task, and you’re exploring all the different ways.”

In a recent online paper, Ajemian and his co-authors theorize that the brain’s millions of neurons, which can each connect with 10,000 other neurons, is in a constant state of reorganization.  This “hyperplasticity” is the brain’s way of getting better at existing skills while also finding ways to incorporate new information.  This search for efficiency continues even when you’re not actively learning.

Balancing this constant shift of connections is the fact that there is also a lot of “noise” in the brain with signals being sent but discarded.  Without this noise, current skill memories would be erased by the incoming information during practice.

So, when Shaun White adds that extra rotation to his jump, his brain works that new task into what he already knows and comes up with a new map of synapses which he labels “frontside double-cork 1440.”  With each practice jump, each video review and each day spent thinking about the trick, his brain searches for the optimal pattern of neurons and connections.

“That’s why an expert tennis player has to warm up for an hour before a match,” Ajemian says.

Visualizing a motor skill sequence helps the brain’s motor cortex to recall and recalibrate the best network.  For everyday tasks that don’t change often, like tying your shoes, the skill memory is less vulnerable.  “Once you’ve learned something, if it doesn’t overlap or intersect with other skills, you will forget it but so slowly that it’s essentially permanent,” said Ajemian.

So, there does not seem to be a limit to conquering new sports skills in your brain.  Only imagination and practice stand in your way.