Early to bed, early to rise makes a high school student healthy, less cranky and hopefully a little more wise. Despite this simple nugget of common sense, most parents of teenagers know the battle of getting them to bed at a decent hour (“But I’m not tired!”), then dragging them out of bed in the morning (“Okay, Okay, I’m up!”) First, there’s our assumption that teen sleep cycles are identical to adults. Second, there’s adolescent distractions of homework, sports, friends, and electronic attention-grabbers. Either way, the result is a nation of sleepy students who risk poor grades, accidents and a stressful zombie lifestyle. New research confirms that lack of rest can affect school performance, and pediatricians believe that school start times may contribute to the problem.

A recent survey by the National Sleep Foundation discovered that 59% of 6th through 8th grade students, along with 87% of high school students, were getting fewer than the recommended 9 hours of sleep on school nights.

“Chronic sleep loss in children and adolescents is one of the most common - and easily fixable - public health issues in the U.S. today,” said pediatrician Judith Owens, MD, FAAP. 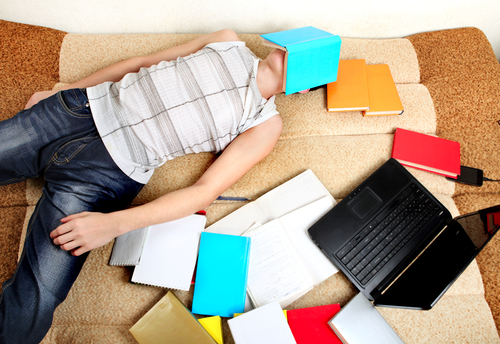 “The research is clear that adolescents who get enough sleep have a reduced risk of being overweight or suffering depression, are less likely to be involved in automobile accidents, and have better grades, higher standardized test scores and an overall better quality of life. Studies have shown that delaying early school start times is one key factor that can help adolescents get the sleep they need to grow and learn.”

Indeed, an estimated 40% of high schools in the U.S. currently start their day before 8 am while only 15% begin after 8:30 am. Most middle schools start by 8 am with more than 20% starting before 7:45am. The usual reason for this is a shared bus system for a school district. The same set of busses and drivers need to pick up high school, middle school, and elementary school students, so let the youngest kids sleep the longest and make the teenagers get out of bed.

In fact, a new Swedish study involving more than 20,000 kids, ages 12 to 19, found that sleep disturbance and repeated nights of less than 7 hours of sleep increased the risk of bad grades and failure in school.

Dr. Owens and her colleagues at the American Academy of Pediatrics (AAP) are trying to convince school districts to start everyone later to allow for the unique sleep patterns of all students. In September, the AAP released a policy statement, “School Start Times for Adolescents,” published in the September 2014 issue of Pediatrics.

They recommend that schools plan their day to allow students to get at least 8 hours of sleep, meaning start times should be no earlier than 8:30 am.

“The AAP is making a definitive and powerful statement about the importance of sleep to the health, safety, performance and well-being of our nation's youth,” said Dr. Owens, who was the lead author of the paper. “By advocating for later school start times for middle and high school students, the AAP is both promoting the compelling scientific evidence that supports school start time delay as an important public health measure, and providing support and encouragement to those school districts around the country contemplating that change.”

Hopefully, some school superintendents will listen and consider not only the needs of their students, but also the joy of sleeping another hour themselves.