“Watch the puck.” That seems like obvious advice for young hockey goaltenders, but during a 3 on 2 rush or a 1v1 breakaway, there are so many distractions to throw off that vital focal point.  When asked where they were looking right before a shot, the novice goalie will claim to have been fixated on the puck, yet several vision research studies have shown that their eyes are darting all over the scene.  Being able to concentrate only on the puck for that critical last second is what differentiates expert and developing goalies.

Across many sports, an athlete’s vision often determines their success at either shooting or passing an object, like a puck, at a target. The same goes for stopping the object, like a slap shot heading towards the goal.  These skills require a player to focus their gaze on the right points in the environment and ignore the rest of the scene.  Joan Vickers, professor of kinesiology at the University of Calgary, has observed both expert and non-expert athletes to define the "best practices" of visual control so that the novices can be coached to better performance. 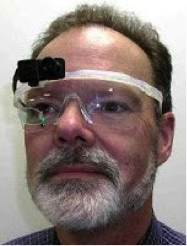 To be able to see what the player is seeing, her team at the Human Performance Lab at the University of Calgary developed the use of "eye-trackers" placed on the athlete’s head to monitor the focus and gaze of their pupils.  The connected software system will show a coach a video playback of what the player actually saw along with a record of all the individual eye saccades and focal points.

Similar research in other sports has confirmed that the best baseball hitters zero in on the exact release point of the ball from the pitcher’s hand. When putting in golf, the experts fix their stare on the edge of the cup for an extra second just before striking the ball.

This single visual target helps the eyes sync up with the neuromuscular system so that the brain is ready to make quick decisions.  Vickers calls this the “Quiet Eye” skill as opposed to an untrained player who allows his gaze to constantly shift to multiple points (i.e. a “noisy” eye).

In a landmark study, Vickers and Dr. Derek Panchuk of Victoria University used the eye tracking system to observe the gaze behavior of expert versus novice goalies.  The experts locked onto the puck and the blade of the shooter’s stick faster and longer than the novices, allowing them to have a significantly higher save percentage. As can be seen in this screen shot of eye-tracking system, the goalie’s focus was on several different points but when they stared at the puck itself, they stopped more shots.

"Looking at the puck seems fairly obvious," said Derek Panchuk, PhD, of Victoria University and a research partner of Vickers. "Until you look at the eye movements of novice goaltenders, who scatter their gaze all over the place and have a much lower save percentage than the elite goalies." 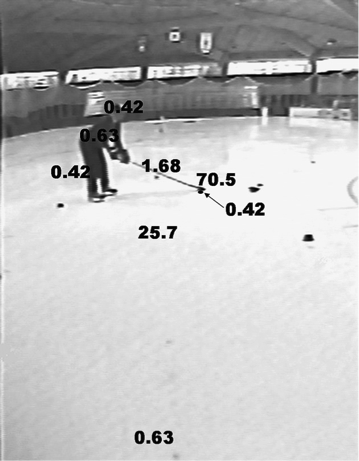 Watch recently retired Canadian goalkeeper Martin Biron warming up for the 2012 Winter Classic game through this helmet cam video.  You can see how his focus is constantly on the puck.  By incorporating Quiet Eye training into practice, young goalies can learn to block out distractions and teach their eyes to fixate solely on the critical target, the puck.

"Goalies often focus on physical things like improving technique but they overlook the decision-making -- the cognitive side of things," Panchuk said. "I think this shows that you also need to focus on your decision-making and your thinking processes. Having optimal focus is just as important as being in optimal physical shape."