Trying to break down old stereotypes of “playing with pain” and “just shake it off” has been the goal of an onslaught of communications to parents and coaches that head injuries need to be taken seriously. In fact, in its first year, the HeadsUp program from USA Football, that encourages youth football players to avoid using their head in a tackle, has been adopted by over 2,800 of the 11,000 youth football organizations.

"Pioneering is exactly what it is turning out to be," former NFL running back Merril Hoge, now a member of USA Football's Board of Directors, told USA Today. "Anytime you find you need to do something you haven't been doing because of a lack of information, you absolutely need to do something. We've done a lot of work and put in a lot of man-hours and have people involved who care about the kids."

To better measure the success of efforts like these, the High School Reporting Information Online (RIO) system was created to allow athletic trainers from around the country to report sports-related injuries for tracking and trending purposes. For the seven years, ending in 2012, there were 4,024 concussions reported across a sampling of 100 high schools in football, wrestling, boys and girls soccer, boys and girls basketball, baseball, softball and girls volleyball.

"It's scary to consider these numbers because at first glance it looks like sports are getting more dangerous and athletes are getting injured more often," said Joseph Rosenthal, clinical assistant professor of physical medicine and rehabilitation at The Ohio State University and lead author of the study. "This study is observational so it doesn't offer any proof about why the rates are going up. But I think in reality it's showing that concussions that were occurring before are now being diagnosed more consistently -- which is important." 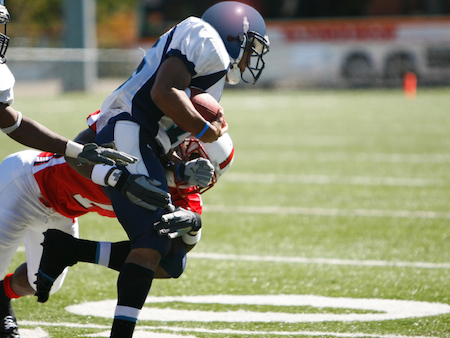 Of the nine sports studied (which surprisingly did not include ice hockey), football had the highest concussion rate. While boys basketball, boys wrestling, baseball and softball showed significant increases as well.

The study is published online in the American Journal of Sports Medicine.

"A lot of injured athletes don't want to come out of games or stop practicing because they don't want to lose their position.” Dr. Rosenthal said. “But they can have symptoms that can last for an extended time period that can affect day-to-day life, school and personal relationships -- they can experience irritability, pain, difficulty concentrating and sleep problems. Our theory is that more people are looking for concussions, and athletes, parents and coaches are being educated on the symptoms and importance of removal from participation, as well as treatment. There is a greater emphasis on monitoring for injury.”


Without drastic changes to these sports, head injuries will unfortunately remain a part of the game. However, the upside is that there are encouraging signs that we’re willing and able to recognize – making sure to acknowledge and treat concussions before sending our players back in the game.