The Science of Catching Fly Balls

A fly ball is hit to the outfield. The left fielder sees it, tracks it, jogs 30 feet back and to his left and makes a routine one-hand catch. Sometimes a sprint is needed, maybe even a last second dive for the ball, but most experienced fielders are able to sync their movements to arrive at the ball’s landing point at just the right time. Watching 8-year-olds trying to do the same thing raises some interesting questions about how this skill is learned. At the crack of the bat, some kids will charge forward for a few steps, only to quickly see that the ball will sail over their heads. Others will backpedal to the left, only to be turned around to the right in mid-flight.

Sports scientists, along with physicists, mathematicians and even a rocket scientist have been perplexed by how our brain takes in the visual information of a ball’s flight and sets a navigation map for our glove to intercept it. Several theories are out there and a recent study by Dutch researchers has shed some light on the answer.

Whether it’s a ball in flight or an enemy missile, intercepting a flying object involves plenty of math and physics. Former NASA engineer, Michael McBeath, now a professor at Arizona State University, has been working on this problem for almost twenty years. 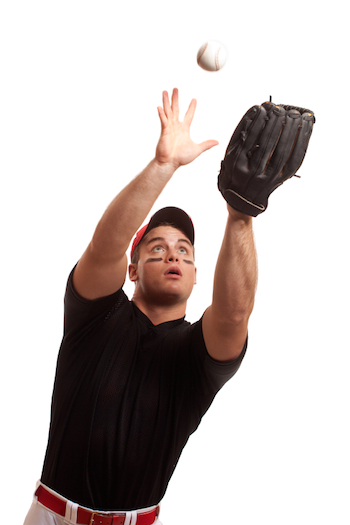 As I’ve explained elsewhere, his team developed a rocket-science-like theory, named Linear Optical Trajectory (LOT), to describe the process that a fielder uses to follow the path of a batted ball. LOT says the fielder will adjust his movement towards the ball so that its trajectory follows a straight line through his field of vision. Rather than compute the landing point of the ball, racing to that spot and waiting, the fielder uses the information provided by the path of the ball to constantly adjust his path so that they intersect at the right time and place.

The LOT theory is an evolution from an earlier theory called Optical Acceleration Cancellation (OAC) that had the same idea, but only explained the fielder's tracking behavior in the vertical dimension. In other words, as the ball leaves the bat the fielder watches the ball rise in his field of vision. If he were to stand still and the ball was hit hard enough to land behind him, his eyes would track the ball up and over his head, or at a 90 degree angle. If the ball landed in front of him, he would see the ball rise and fall but his viewing angle may not rise above 45 degrees.

LOT and OAC argue that the fielder repositions himself throughout the flight of the ball to keep this viewing angle between 0 and 90 degrees. If it’s rising too fast, he needs to turn and run backwards. If the viewing angle is low, then the fielder needs to move forward so that the ball doesn't land in front of him. He can't always make to the landing spot in time, but keeping the ball at about a 45-degree angle by moving will help ensure that he gets there in time. While OAC explained balls hit directly at a fielder, LOT helps add the side-to-side dimension, as in our example of above of a ball hit to the right of the fielder.

While the LOT/OAC theory makes logical sense, it needed some validation in real-life scenarios. In 2010, researchers at Brown University set up a simulated set of fly balls using their virtual reality lab. Eight varsity baseball players and four varsity softball players were fitted with VR glasses and baseball gloves. Seeing the virtual baseball hit from all different angles and speeds, (including a few “impossible” flight paths), they positioned themselves to make the “catch”. Rather than sprint to the exact landing spot and wait, they instead moved at a speed that agreed with the LOT/OAC model. 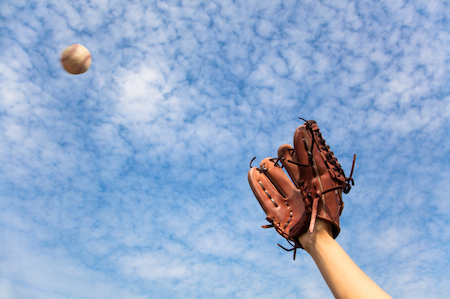 “All the fielders need to do is track this optical variable and it will lead them to a successful catch,” said William H. Warren, professor of cognitive and linguistic sciences at Brown and the paper’s senior author. “They don’t have to do a lot of heavy computation in their heads to predict the landing point.”

To confirm this finding in an even more realistic setting, researchers from the University of Groningen used mobile eye tracking gear to watch the actual gaze of fielders during the flight of the ball. By hiding the initial flight of the ball from view, they could determine if fielders constantly watch the ball during flight or if they just pick up cues from the first few seconds of flight, then know exactly where to run.

The research has been published online at PLOS ONE.

After 54 trials, data from the eye tracking software was able to show that all ten volunteer players needed to watch the ball 95% of the entire time to make a successful catch. Just as with the Brown experiment, these results concluded that keeping your eye on the ball, even out in the field, is great advice for young players.

“Catching is clearly a perceptual motor skill that you have to learn,” Professor Warren said, “but it does raise interesting questions about why some people are so much better at it than others.”

With enough practice, a budding superstar might even end up on a Gatorade commercial making an amazing (even if not real) catch!