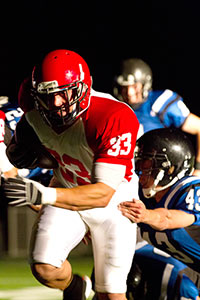 I love photographing football! There, I admitted it. While any day spent photographing sports is a special treat, the moment I walk on to a football field, my heart races just a little bit faster in anticipation of the game to come. Now just to clarify, soccer is also known as football but in this case, I am talking about American football complete with big guys with pads, cheerleaders and touchdowns. I started photographing football in high school, went on to become the team photographer for the UCLA Bruins and then worked for the NFL for a time shooting professional football. I have to admit those Friday night games at the local High School Stadium gave me the same thrill as a packed professional stadium with 90,000 screaming fans.

So what is it about football that makes it so fun to photograph? For me, it is about the variety of choices on every snap of the ball. Yes, you can follow the player with the ball but there are also amazing moments happening away from the ball. The ongoing battles on the line of scrimmage, the maneuvering of the receiver trying to free himself from the defender, the focus and determination from the defensive secondary, the drama in the face of the coach, the spirit of the cheerleaders, the fans, etc. There is plenty to choose from on each snap of the ball.

So let’s first discuss capturing the action when following the ball. The first player who will get the ball on each play is the Quarterback. By standing on the sidelines just behind the line of scrimmage, you can photograph the QB as he either runs, hands off or drops back for a pass. Ever wonder why there are so many photos of the QB? They have the ball in their hands the most. Now the next bit of action depends on what he does with the ball and this is where anticipation and knowledge of the game comes into play. As you know, the team on offense is attempting to get the ball over the goal line at the end of the field. They have 4 attempts to move the ball at least 10 yards for a first down which gives them 4 more attempts and so on. As a photographer, you can attempt to predict what the team might try on any given down. It is common to see more running plays at the start of each series of downs. Running plays are less risky. Passing plays come with attempts for big yardage of if they need a larger gain to get a first down. For example, it is 3rd down and 8 yards to go. You can expect to see a pass. How does this help as a photographer? Well, if you are on the sidelines and you are guessing it might be a run, you can set up either just behind the line of scrimmage and hope the runner comes your way, or get downfield and watch for him to break through the line of scrimmage so he is coming straight at you. If you think it might be a pass, you want to maneuver so that you have a good angle at around that first down marker because that is where they are trying to get. You might want to lift your eyes above your camera, look for a receiver who might be open then quickly focus and shoot as they attempt the catch. 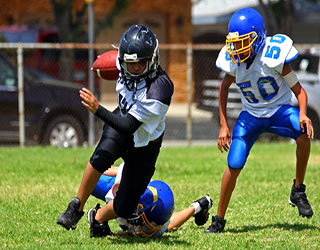 Whenever possible, I like to get straight ahead of the action so they are heading right at me. That would be in the back of the end zone but you can’t move there until the action gets closer or you have a very long lens. I prefer this angle because there is less background clutter. When you are shooting from the sidelines, you will always see the other sideline in the background of your shot. Remember what I mentioned in our other photo tips, clean backgrounds make for a more impactful photo and you can do that by either eliminating the background clutter with your angle or by using a short depth of field. Check out my other photo tips about those subjects as a reminder. 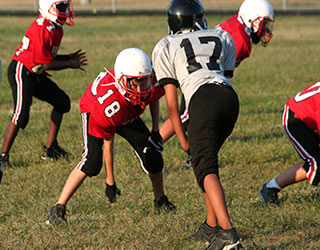 As I mentioned earlier, there is also plenty of drama happening away from the ball. By pre focusing on any lineman, you will get a fantastic series during each play as they either attempt to block or rush the passer. Great stuff happens in the trenches. I also like to keep an eye on the coach and sidelines. When I was the team photographer at UCLA, I remember a game coming down to a field goal attempt. Instead of focusing on the kicker, I focused on the coach. The kick was good and I got a rare photo of the coach leaping into the arms of his fellow coaches and players. Much better than anything happening on the field. Remember, emotion is as impactful as the action itself.

Technically, I always like to use the sun to my advantage when shooting football. I hate cross light (when half of the player is bathed in sun and the other half is in shadow). That is a no win situation. The bright part is blown out and the shadow is too dark.  I want to find the angle where the sun is either straight behind me or straight in front of me. Now the player is either in full light or full open shade. For night games, check out my photo tip about photographing in low light situations.

One more thing to remember. Be aware of where you can and can’t go on the sidelines. You will normally not be allowed in the team sidelines area which stretches between the 25 yard lines. You will only be allowed from the 25 yard line down to the goal line and behind the end zone. Each school or stadium has its own rules so find out in advance. Also be aware of other photographers. If you are photographing your kid, give the person shooting for the local paper some extra room as they are on the payroll and really need the photos where we are just trying to get some good action photos for ourselves. Be respectful and courteous.