PED Use By High School Athletes On The Rise

It’s one of those phone calls that every parent dreads.  On the other end of the line is a school administrator informing you that your son or daughter has failed a drug test.  Instant panic sets in as you wonder what in the world your child has gotten into… marijuana, cocaine, or maybe worse?  “No, your student tested positive for a performance enhancing drug and will be facing a suspension from their sport.”  While relieved that it wasn’t one of the “hard” drugs, you begin to confront all of the factors that may have pushed your young son or daughter to take this drastic step. Several recent surveys show that the use of performance enhancing drugs (PEDs) is growing amongst teen athletes.

While doping by high school students athletes is definitely not on the same level as pro athletes, but there are several PEDs that are becoming popular:

Anabolic steroids - These build muscle, increase endurance and these synthetic versions of testosterone can have some serious side effects.  According to the U.S. Department of Health’s Youth Risk Behavior Survey, published in June 2012, about 3.2% or 640,000 high school athletes, both boys and girls, had tried steroids at least once.

Steroid precursors - This includes androstenedione (“andro”) and dehydroepiandrosterone (DHEA). They are used by the body to convert into anabolic steroids. Steroid precursors help increase strength and come with the same steroid side effects as well.

Ephedrine - A stimulant banned by the U.S. FDA, as well as non-prescription use of Ritalin, is also used by teens to maintain their focus, reduce their fatigue and lose weight.  Strokes, seizures and heart attacks are the most serious side effects.

Creatine - While not a steroid, it is used for quick bursts of energy to get through a tough training session or for sports requiring short, high-intensity effort, like wrestling or sprinting.

Last year, a research survey of 436 elite Australian teen athletes found that 8% had already used PEDs, while another 9% were considering it in the near future.  This is not too surprising, considering that these same kids estimated that 29% of their country’s elite, professional athletes used PEDs. 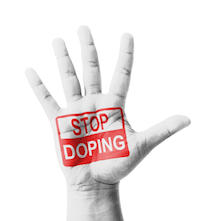 ''One of the reasons people start taking drugs is because they think everybody else is,'' said Associate Professor Stephen Moston from the University of Canberra, who led the study..

The problem with PEDs versus more destructive drugs is that kids don’t feel they’re doing anything wrong.  They see their heroes using them and rationalize it as a means to live up to the expectations of their teammates, coaches and parents..

''These kids are terribly nice 99 per cent of the time but when it suits them they can switch their morality off and do something they know is wrong and stand there with all innocence and say, 'I didn't do anything','' Professor Moston said.According to researchers, education is the key to keep kids on the right track, according to the researchers. It’s not enough to “just say no to PEDs.”

Teens need to understand how the drugs work, what their side effects are and learn alternative ways to deal with the underlying pressures that trigger PED use. Interesting fact-kids who are more extrinsically motivated by praise and acceptance, are also more likely to justify PEDs.

“If you’ve got a higher investment in a public image that you’re a great athlete, then you’re more likely to consider doping to retain that image as well, particularly if you start to get to the stage where you decline in your career.” said Rob Donovan, Professor of Behavioural Research at Curtin University. “We’re advocating for greater input of moral dilemma scenarios and getting athletes to work through them.”Teens are wired to take risks, especially when they can set their moral code aside in the pursuit of achieving success in sports. Parents and coaches need to instill in young athletes that winning is important, but not when it compromises their health.

For more information, listen to the TeamSnap Youth Podcast.